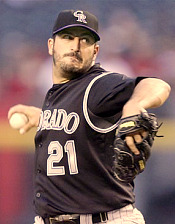 A while back, Jason Marquis began to lobby for a Mets contract offer through his friend and advocate Jeff Francoeur. Now he’s made a full-blown pitch, suggesting to Bart Hubbach that he and the Mets are a “perfect fit”.

As we’ve discussed earlier, Jason Marquis needs the Mets involved if he’s to obtain a multi-year, multimillion-dollar contract from an MLB team. It’s that simple. The Mets are known to overpay free agents year in and year out, particularly when they have an urgent need to fill. This year, the onus is on the Mets to find at least one reliable and durable veteran starting pitcher, and Marquis not only fits that bill but is coming off the best season of his career.

In many ways, I like the idea of Marquis as a Met. He would fit in nicely as an innings-eater at the back end of the rotation. You know he’ll take the ball every fifth day, compete, and give your team a decent chance to win. But he won’t be worth the many millions nor the multiple years he’ll likely get this winter.

That’s not only because he’s a younger, better-hitting version of Jeff Suppan or Steve Trachsel — essentially, a .500 pitcher whose main value is the ability to take the ball 32 times a year. It’s also because there’s something fishy about his aggressiveness in lobbying the Mets. Sure, he needs them to make an outlandish offer — and they will, once they miss out on John Lackey — but you have to wonder if something else is going on.

One theory — suggested by “Ceetar” on Twitter — is perhaps Marquis is hiding an injury. As far as I know “Ceetar” has no inside sources, and neither do I, so let’s make clear that this is mere conjecture, with no basis in fact. But it’s something to wonder, especially considering Marquis’ significant drop off in performance in the final months of the 2009 season, combined with his 10 years and 1500 innings of MLB service.

In Marquis’ defense, he hasn’t been on the DL with an arm issue since a shoulder injury in 2002. And perhaps his dropoff down the stretch had to do with blister issues that began around the All-Star break.

But even if he isn’t hiding injury, Marquis just turned 31, and most pitchers begin to break down in their early 30s, if they haven’t already. I’m guessing that he’ll be looking for something along the lines of a 3- or 4- year deal, sending him beyond age 35, at around $10-13M per season. Far-fetched? Consider that his last contract — a 3-year, $21M deal — was netted after his WORST MLB season. The dearth of pitching since then has not subsided, and the price of durable pitchers continues to go up.

I do believe Jason Marquis would give the Mets at least two solid years, especially pitching half his games in Citi Field (though he might not hit with as much power). But again, I see him more as a Jeff Suppan or Steve Trachsel type — giving you 180-200 IP, a 12-12 record, maybe 14 wins with a little luck. Considering that the Mets’ second-best starter went 10-12, Marquis would be an upgrade. But for what he’ll cost, he’s far from a “perfect fit”.