Paul LoDuca Wants To Come Back 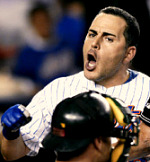 This afternoon in an appearance on XM 175 MLB Home Plate (SIRIUS 210), former Mets catcher Paul LoDuca expressed a desire to return to the big leagues in 2010.

LoDuca missed all of 2009 due to injuries, but claims he is now 100 percent healthy, and ready to make a comeback.

Here is what LoDuca had to say on XM:

Paul Lo Duca: “I’m completely healthy. I feel unbelievable. I’ve been hitting the last four or five days constantly and started my workouts. I feel great. My hand feels 100 percent for the first time in a while. My hamstring and my knee finally healed after the surgery I had there. … I want to come back and play. When I started working with you guys (as a part-time analyst) and started really watching the games it really gave me that edge. My heart’s into it and I want to go back in it full bore and [do] whatever needs to be done. I want to play on a team that wants to win and wants a player that wants to win. I’ll do whatever I need to do. If it’s come off the bench, if it’s spot starts, I’ll do whatever they need me to do.”

Lo Duca: “I’m a realist. I’m going to be 37 but my knees feel good. I’ve only had one knee surgery. There’s no issues there. I really feel like I can offer a good bat off the bench to somebody and do whatever needs to be done. … Whatever they want me to do. I’ve played other positions before. If they need me to catch and if something goes down then I can do that as well. Whatever the manager asks me to do I’m willing to do.”

Lo Duca: “Whatever happens I’m looking just to get an invite. If you don’t like me when I’m walking in the clubhouse, hey, you don’t like me, go ahead and send me home. That’s fine. But I’m going to show up in great shape and ready to go. We’ll see what happens. I’m gung-ho. I’m really energetic about coming back. I feel like I still have a lot to offer.”

Hmm … the Mets need a catcher, a righthanded-hitting first baseman, and a left fielder — and LoDuca has ably handled all three positions as a big leaguer. He also has that “fight” and “grittiness” that Mets fans adore.

Would you give him an invitation to spring training?