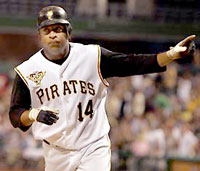 Rumor has it that the Mets are trolling the market for a second baseman to fill in while Jose Valentin recovers from a torn ACL. Apparently the current setup of Damion Easley and Ruben Gotay is not perceived by management as a viable solution. Or perhaps Omar Minaya is using second base as an opening to negotiations, with the real goal of prying away a top-flight starting pitcher kept under the cuff until talks get heavy enough to start expanding the deal.

Despite the recent slugging and heroics of Damion Easley, he isn’t the ideal everyday second baseman. There’s a reason he hasn’t been a starter since 2001 — his fielding is less than adequate, and that slow, loopy homerun swing has signficant holes. Easley’s weaknesses will become more apparent and exposed the more often he plays. Don’t get me wrong — I like him a lot — but as a part-time player and pinch-hitter.

Easley’s caddy, Ruben Gotay, has better skills in the field and might be a better hitter, but chances are we won’t find out. Willie Randolph is hesitant to give Gotay regular work at the keystone, for two reasons: first, he feels obligated to make the veteran Easley play himself out of a job, and second, Randolph simply trusts “his veterans” over a youngster such as Gotay. Ruben Gotay will need to string together a few remarkable performances before getting a chance to start two days in a row. It’s too bad, because if given a week of starting, he could prove to be a viable replacement while Valentin mends. But that’s unlikely to happen unless Easley also goes down — and even then, Randolph might start mixing in David Newhan at the position.

If the above is true, then the only an outsider has a chance to start over Damion Easley.

Last week MetsToday thought Jose Castillo might be available, and now it appears that he is. the Pittsburgh Gazette reported that Castillo’s agent has requested a trade, citing his lack of playing time (the former starting infielder has only 32 at-bats this year). Is Castillo a better option than Easley/Gotay? Hard to say, as he’s pretty close to achieving what the current combination will likely produce, but he’s not a significant upgrade over either. In the field, Castillo is average to above-average, but tends to have John Maine-like lapses in concentration that affect his defensive play. Offensively, he’s capable of going on mad tears — such as a 3-week streak in May of last year that improved his batting average by 60 points. If he’s not hitting, however, Castillo is an overall average contributor. Plus, there is the consideration of his work ethic, which has been an issue in Pittsburgh. Would it be worth it to the Mets to bring in another question mark? Perhaps the only positive of such a deal is that it’s with Pittsburgh, who last handed us Oliver Perez. Is another fleecing in the offing? 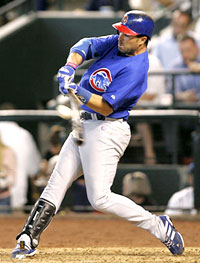 More likely, I see Omar Minaya waiting out Todd Walker’s ten-day assignment and sign him to a contract. Walker was DFA’d by Oakland on Saturday, and might be worth a flyer. In many ways, he is the lefthanded-hitting version of Damion Easley: a seasoned veteran, former All-Star, great clubhouse presence, strong hitter, but average to below-average at second base. Though his range is limited, he’s sure-handed, and the man can still hit and get on base. He has the kind of short, line-drive swing that is impervious to slumps, and ideal for hit-and-run and situational hitting. Walker is a shell of his former self, but he’s been a hard-nosed, team-first, winning ballplayer wherever he’s been — one of “Willie’s guys”. All in all, he may be the ideal platoon partner (with Easley) to get the Mets through the next two months — and he’d also give the Mets another nice lefthanded bat off the bench. Perhaps best of all, the Mets won’t need to trade anything for him, he’s cheap, and he won’t require a commitment beyond this year.

The more I think about it, the more Walker would be an ideal fit — though only if the Mets can figure out a way to keep a late-innings defender such as Gotay or Anderson Hernandez on the roster. It might mean a demotion for David Newhan, though he doesn’t seem to give the Mets much else than a middle-innings pinch-hit option.

The real question is, how would Walker look with a shaved head?

Back Inside Look: Chicago Cubs
Next Series Preview: Mets vs. Cubs