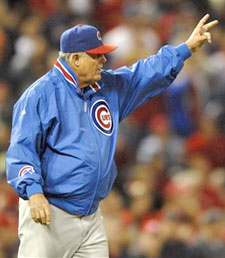 The Cubs roll into Shea a much different team from last year’s 66-96 squad, with new faces from top to bottom. Perhaps the most significant change was in leadership, as the fiery Lou Piniella replaced the easygoing Dusty Baker. Piniella’s demanding expectations and hands-on style are a complete turnaround from the country club atmosphere during Baker’s tenure.

However, not many Cubs would know the difference, as there was a severe housecleaning in the offseason. Michael Barrett, Aramis Ramirez, Jacque Jones, and Derrek Lee are the only starters returning from last year, and the Cubs spent well-publicized hundreds of millions of dollars to import free-agents such as Alfonso Soriano, Jason Marquis, Ted Lilly, and Mark DeRosa. It’s taking some time for the new faces to mesh, as they sit today with a 17-18 record, 7 games behind the first-place Brewers. However, there is significant talent on this team, and my guess is that they’ll get better as the season wears on. It takes time for players to define their roles and a team to gel. Hopefully, they’ll be “gellin'” long after this four-game series in Flushing.

Game one: Tom Glavine vs. Jason Marquis
Tom Glavine goes for his 295th career win against Long Island native Jason Marquis. Marquis is the biggest pitching surprise in the NL, this side of John Maine, sporting a svelte 1.70 ERA and posting a 5-1 record. Apparently the Cubs were able to fix some issues that pitching guru Dave Duncan couldn’t, and as a result he’s on his way to a career year. Tommy will need to pitch his typical “vintage Glavine” game, as the Mets may struggle against the much-improved Marquis.

Game two: John Maine vs. Carlos Zambrano
A year ago, this game would look like a gimme for the Cubs — but what a difference a year makes. Maine and Zambrano are moving in opposite directions, as Chicago’s 2006 ace is struggling with an ERA soaring into the sixes. Our insider Al Yellon tells us Zambrano is having an arm angle issue, and we witnesses of Oliver Perez know what that’s all about. Let’s hope our Maine man can continue his rapid ascension and Zambrano keeps slipping.

Game three: Jorge Sosa vs. Rich Hill
Can Jorge Sosa continue his domating ways? My gut says no, but maybe he has one more rabbit left in his hat for the Cubs. Of course, if he pitches a third masterpiece, we may have to start taking him seriously.

The Mets batters may have their hands full with Hill, a big lefty with an equally big overhand curve. If you’ve noticed, the Mets don’t like curveballers — witness their issues with the otherwise ordinary Matt Morris, who threw nothing but deuces. If Hill got the same scouting report as Morris, and his curveball is biting, it could be a long day for the Mets hitters. On the other hand, if his Uncle Charley is on a noose, we may see some Mets fly balls find the fence.

Game Four: ? vs. ?
The Cubs have Angel Guzman scheduled, and it’s presumed that he’ll start in the Thursday afternoon finale. However, he gave up four runs in 5 1/3 innings against Philadelphia on Saturday, and there are whispers that Chicago may bring up Sean Marshall to take his spot. The Mets, on the other hand, have yet to make a move since demoting Mike Pelfrey, and likely won’t promote anyone until Wednesday. Since Jason Vargas was scratched from his Sunday start in Las Vegas, there’s reason to believe he’ll be added to the Mets’ pitching staff. However, that doesn’t necessarily rule out a spot start by veteran Aaron Sele, who has pitched only

Mets Bats
David Wright and Carlos Delgado are finally out of their slumps, but Shawn “Samson” Green has only one hit since shaving his locks. Additionally, Moises Alou might miss at least the first two games, but that’s not much of a loss considering his .208 average in May coupled with the emergence of Carlos Gomez. Gomez started with a bang on Sunday, going 2-for-4 with a double, a steal, and two runs scored. If he can keep that kind of pace up, Alou might be Wally Pipped. Paul LoDuca is batting .308 in his last 7 games, and Jose Reyes is hitting a ho-hum .353 over the same span. Damion Easley is also wielding a hot bat, batting .400 with 2 HRs and 5 RBI in the last week.

The Cubs may have the most dangerous lineup, top to bottom, that the Mets will face all year. Cesar Izturis is the only light hitter among the regular eight, but he’s 6-for-his-last-10. Matt Murton is also 6-for-10 over the last three games, hitting in the fifth spot of the order. Local boy Mark DeRosa (Passaic, NJ) has a career .364 average against the Mets, going back to his Braves days, though he’s been cold lately.

The real mashers in the Cubs lineup, of course, are Alfonso Soriano, Derrek Lee, and Aramis Ramirez. There’s no hiding or pitching around those three, as they’re among the first four bats in the lineup. The good news is, Lee might not play due to neck spasms, and Soriano is slowed — on the bases, at least — by a sore hamstring. Still, any of those three could change a game with one swing of the bat.

Sorry to say, we probably won’t see much of Cliff Floyd, as he is a backup in the Cubs’ crowded outfield. With Murton swinging a hot bat, and Soriano playing leftfield due to the hammy, Floyd is more or less relegated to pinch-hitting appearances.

This series could be tougher than you might think, as Lou Piniella is starting to get a handle on what he has here — and these Cubs are loaded with talent. The Mets made a statement by taking two of three from Milwaukee, but I’ll be happy with a split against the Cubs, especially considering that the starting rotation situation is still up in the air. It should be a fun and exciting prelude to the Yankees’ return to Shea at the end of the week.

Back Mets Second Base Question
Next Urdaneta Down, Burgos Up