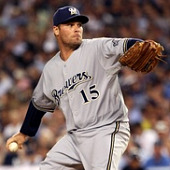 Ben Sheets
When healthy, he is one of the top starters in MLB — an absolute ace. In addition to his lively 95+ MPH fastball and nearly unhittable, hard-breaking curve, Sheets is a bulldog, an intense competitor whose demeanor reminds one of Roger Clemens. Health, of course, is the major issue, as his career is pockmarked with elbow, shoulder, hamstring, and back injuries. If his elbow was the only problem, then signing him would be a no-brainer, since the surgery on his elbow flexor tendon was a success. But there’s still the back and the shoulder, which likely in turn caused the hamstring injury … and he’ll be 32 by the All-Star break.

Rich Harden
Like Sheets, Harden is an ace — when healthy. After starting only 16 games in 2006 and 2007, Harden managed to make 25 starts each in 2008 and 2009. Despite that improvement, Harden is far from durable. In each of the last two years, he’s spent time on the DL for problems with his back and shoulder. Previously, he had elbow problems — including an injury that kept him out for nearly all of 2006.

Unlike Sheets, Harden has yet to throw more than 189 innings in a season (in fact, he’s only topped 150 IP once in 7 years). Also unlike Sheets, he’s never been on an operating table. His age is also an apparent plus — he’s only 28. But you know what? His mechanics are downright awful, and will continue to cause him multiple arm injuries. He has a similar arm action to John Maine, in that he over-rotates during the leg lift and his right arm extends behind his back after the hand break — which puts extreme pressure on the shoulder. That over-rotation also leads to premature opening of the front side, which is exacerbated by a lazy glove that stays low and pulls the upper body toward first base — putting more pressure on the shoulder and additional strain on the elbow. In my opinion, Harden will never start more than 25 games in a season — and may be lucky to start that many. Some may argue that 25 Harden starts are better than 25 by most others, but in 2009, he had a .500 record and a 4.09 ERA — not exactly dominating. His back and shoulder issues will only get worse as he ages, and they can’t be helped by surgery.

Erik Bedard
Bedard is in the same class as Sheets and Harden when it comes to ace-like stuff, and he’s been the lead man on many staffs. But his issue is with his shoulder, and that’s a problem because unlike the elbow, the full recovery from shoulder surgery is an anomaly rather than a rule. Bedard has had two shoulder surgeries since the summer of 2008 (the first was to remove a cyst — not unlike John Maine’s). And he shares another similarity with Sheets and Harden in that he’s already had a major elbow injury — he had Tommy John surgery in 2002. So, like Harden, you have to suspect there is something inherently wrong with Bedard’s mechanics. The mechanical flaw plus the fact he’s coming off shoulder surgery makes him an extremely risky signing.

Justin Duchscherer
OK, he may not have ace-like stuff, but he’s shown enough to suggest he could be a borderline #2 — along the lines of a Derek Lowe. Duchscherer missed all of 2009 after elbow surgery, but is now healthy — physically, anyway. In addition to the arm problem, Duchscherer also had a bout with depression. Still, the soft-tossing righty was a two-time All-Star and went 10-8 with a 2.54 ERA and 0.995 WHIP through 22 starts in 2008. Considering that most pitchers make full, successful recoveries from Tommy John surgery, and that Duchscherer never relied on velocity to succeed, there is every reason to believe he can return to his All-Star form.

Kelvim Escobar
Another guy with absolutely electric stuff but who has had a hard time staying healthy. Unfortunately, Escobar had surgery to repair a shoulder tear in 2008 that has sapped him of much of the velocity that made that stuff so electric. He threw five innings in one start in 2009, and his health remains questionable. He might be worth a minor league deal and ST invite, but nothing more.

Brett Myers
As a 24-year-old in 2005, Myers made 34 starts, won 13 games, and struck out nearly a batter an inning. It seemed he was on the verge of becoming an ace. But injuries and behavioral problems have sent his career downhill ever since. Now he’s in his late twenties and coming off a season in which he missed 86 games due to a hip injury, and another 18 games with a back problem. He has good stuff, but his recent injury history and questionable attitude make him a major risk.

Jason Schmidt
Shoulder problems have ended this hard-throwing righthander’s career. He is expected to retire.

Conclusion
To me, Duchscherer has the best chance of coming back and pitching effectively, but he’s more Jamie Moyer than Nolan Ryan. Even though Sheets didn’t throw a pitch in 2009, I think he has a better chance of making 25 starts in 2010 than Harden or Bedard. That said, if the Mets are to roll the dice, I’d like to see them make a gamble on Sheets.

As a reminder you can vote on your favorite Mets free agent targets.

Back Billy Wagner Signs with Braves
Next Gifts for Mets Fans: 2010 Alternate Jersey