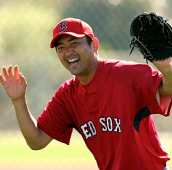 In a matter of 48 hours, the Braves have rebuilt their bullpen.

A day after signing Billy Wagner to be their closer, Atlanta wasted no time in locking up a setup man — Takashi Saito.

Saito was signed to a one-year, $3.2M contract. And just like that, the 8th and 9th innings are solved for the Braves.

I know what you’re thinking: a 39-year-old closer and a 40-year-old setup man sounds like a formula for trouble — particularly when both oldsters have suffered elbow issues in the past two years. But Wagner has a new elbow, and Saito cruised through 56 appearances last year — pitching in the AL East, no less.

All told, the Braves spent a total of $10.2M and a one-year commitment to shore up the back of their bullpen with two standout veterans. Compare and contrast that to the Mets’ strategy last winter of tying up K-Rod for 4 years and spending a total of $60M for him and J.J. Putz to finish up games in 2009. Now, which bullpen makeover made better sense?

So, to conclude the activity for the day: the Phillies added a Gold Glover to their infield, the Braves completed the overhaul of their bullpen, and the Mets signed two backup catchers.

The offseason is still young.

Back Marco Scutaro Off the Table?
Next Reese Havens: Swing Evaluation