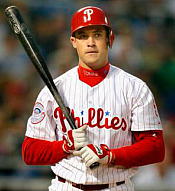 Back Josh Willingham a Target?
Next Hot Stove Heats Up at Winter Meetings