Lackey, Halladay, and the Mets 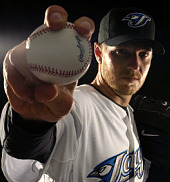 Within the next 48 hours, John Lackey will be a member of the Boston Red Sox.

During that same time frame, there is a good chance that Roy Halladay joins the Philadelphia Phillies, while Cliff Lee moves on to Seattle to form — with Felix Hernandez — perhaps one of the most potent lefty-righty starting combinations in MLB since Randy Johnson and Curt Schilling.

Meanwhile, the Mets have announced the signing of Kelvim Escobar to a minor-league contract.

This is a problem, because the Mets need starting pitching, and two of the top targets of the winter will be joining other teams — and a third non-target (Lee) is also moving on. That leaves few, if any, top-notch starters left on the market. In fact, the next-best healthy starting pitcher available is Derek Lowe, and there’s little chance of the Braves trading Lowe to an NL East rival.

Where do the Mets go from here, and what’s left to pursue?

Prior to Lackey’s signing, second-tier free agents Randy Wolf, Brad Penny, and Rich Harden all found new clubs. The “best of the rest” that are still available on the free agent market include Ben Sheets, Joel Pineiro, Jarrod Washburn, Brett Myers, Jon Garland, and Erik Bedard. You may want to extend that selection to Jason Marquis, Vicente Padilla, and Doug Davis. In any case, it’s not terribly promising — a mix of highly risky “lottery tickets” (Sheets, Bedard), questionable enigmas (Pineiro, Myers), and mediocre innings-eaters (everyone else).

Lackey going to the Bosox means Jason Bay likely won’t return to Boston, but also likely means that Mike Cameron will be in Fenway in 2010. Additionally, the loss of Lackey by the Angels means there’s budget for Bay or Matt Holliday. Further, there is a lot of buzz suggesting that Seattle is the most likely landing place for Bay — which means the Angels may set their sights on Holliday.

If all that proves true, the Mets will miss out on the top pitchers and outfielders on the free agent market, as well as an outfielder that some thought would be a good fit in Citi Field (Cameron).

True, it’s a rather weak free agent class this winter, with most of the better players signing over-valued contracts. But there’s a big dropoff after the top names, with the remainder exhibiting significant risk. Further, the Mets have very little — if anything — to offer in trade.

Sorry to sound so pessimistic, but the events of the past 24 hours have set the dominoes in motion, and in the end, the Mets are left holding an empty bag. If everything occurs as expected, the Mets will need to be more cunning, creative, resourceful, and lucky than they’ve ever been in their history in order to significantly improve their club — in a winter when their division leader and NL Champion has already improved upon a superior ballclub.

Unless something great happens very quickly, it’s looking to be an unsatisfactory Christmas for Mets fans.

Back Lackey to Red Sox?
Next Royals Sign Phil Humber