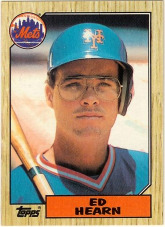 Last night I watched “Prime 9” on the MLB Network last night; it was the episode titled “Top 9 Greatest One-sided Trades”. The #8 trade on the list was the Mets’ trade of Ed Hearn to the Royals for David Cone (though the narrator kept referring to someone named “Dick” Cone).

Back then, it seemed a bizarre trade from the Mets point-of-view. I remember it vividly, being a diehard Mets fan and owning an abnormal affection for Hearn (hey, I’m a catcher, and love ALL catchers!). To me it was a strange deal, because although he was one of three young and capable backups the Mets had on the roster — Barry Lyons and John Gibbons were the others — Hearn was head and shoulders above the others in terms of defense, and Gibbons had a hard time staying healthy. What made the trade stranger was that the Mets traded steady Eddie for, of all things, a pitcher.

The deal echoed the quote of Peter Falk from the opening scene of the original “The In-Laws”:

Gee, I can’t believe this trade. What do the Mets need another pitcher for?
All they got is pitchers.

That’s exactly how I — and many Mets fans — felt at the time. What in the world did the Mets need with another pitcher? After all, they were loaded. They were the reigning world champions, and had young arms up the wazoo. Dwight Gooden, Ron Darling, and Sid Fernandez were all under 25 and headed a rotation that also included veteran Bobby Ojeda and barely had room for young Rick Aguilera. And, they had a 21-year-old phenom named John Mitchell ready to break into the bigs, as well as another can’t-miss kid named David West who was knocking on the door (not to mention a lefty named Randy Myers who had been converted to relief because of the backlog of starters). Of all the trades to make, why would the Mets give up the possible heir apparent to Gary Carter for yet another young pitcher?

Hindsight, of course, is 20-20. We know now the genius of that deal. But now that we’re 20+ years past that time, it takes on more meaning. Not because Frank Cashen pulled a fast one on the Royals, but because Cashen believed a team could never have enough pitching — particularly, young pitching.

Again, remember that the Mets acquired Cone at the tail end of spring training in 1987 — about five months after the franchise won their second World Championship. It didn’t matter that the Mets were the best team in baseball, with the deepest and best young pitching staff in MLB. As far as Cashen was concerned, there was always room for one more good arm, even if acquiring one involved something of a gamble.

Compare that to the Mets’ philosophy of today — if you can even identify a “philosophy”. At the least, compare Cashen’s strategy to continue stockpiling what was at the time a strength, to Omar Minaya / Jeff Wilpon’s plan of crossing fingers and whispering novenas as they pin the team’s hopes on a half dozen hurlers coming off surgery.

Which strategy makes more sense to you? Granted, the Mets didn’t win another championship after ’86, but they were legitimate pennant contenders through 1990 (Cashen stepped down after a terrible, disappointing 1991 season).

Unrelated addendum: you may already know the sad but also inspirational story of Ed Hearn after he left baseball, but if you don’t, you definitely should check out his website.