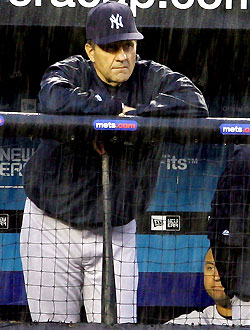 What began as a blowout ended as a near-nailbiter.

The storyline was impressive: it was wet, it was wild, it was boring for a while, yet by the end you were on the edge of your seat, hoping that Billy Wagner was not made of sugar and be melted down by the pouring rain (he’s not, and so he wasn’t).

With plenty of offensive support, Tom Glavine cruised to his 295th career victory, and fifth of the season. His stuff was mediocre, command slightly off, and the home plate umpire squeezed him — but somehow Glavine held the mighty Yanks to three runs on nine hits and two walks. He tossed 101 pitches in six innings, only 58 for strikes, as he picked around the plate to patient Yankee hitters. No doubt he benefitted from a quick launch of the Met offensive, which afforded Glavine an 8-2 lead in the fourth inning. The Mets scored early and often, and combined with Glavine’s assorted slowballs, the Yankees were lulled into near sleep.

Robinson Cano, in particular, appeared to be sleepwalking. He committed three errors, and would have been charged with a fourth if not for the technicality that you can’t assume a double play. Looking back, his miscues may have been the difference in the ballgame, as the Yankees rallied late and eventually lost by three runs.

The Mets pounded out 12 hits and 10 runs, with David Wright making a statement by hitting two two-run homers. The statement was heard — loud and clear — as Wright was walked intentionally the next three times he came to the plate.

Believe it or not, the scoring began in the first inning with — guess who? — Jose Reyes, who led the game off with a single, stole second, moved to third on an Endy Chavez infield hit, and scored on a sacrifice fly by Carlos Beltran. That story sound familiar?

The Yankees were struck by yet another stroke of incredibly bad luck, as starter Darrell Rasner had to leave the game after allowing the aforementioned single to Chavez. Endy bounced a ball back through the box, which deflected off Rasner’s hand and fractured his index finger. Rasner had to leave the game and was relieved by LOOGY Mike Myers. Myers performed well, considering that he collects a paycheck for the sole purpose of retiring David Ortiz. However, his submarining style was no match for the bat of Wright, who blasted one of his offerings high over the leftfield bleachers, extending the Mets’ first inning lead to 3-1.

In the second, the Mets let up on Myers a bit, scoring only one on a single by Legendary Endy. However, Carlos Delgado led off the third with a single, and David Wright reminded Myers of his skillset by launching his second homer off of the outstretched glove of Johnny Damon and over the centerfield wall. That second tater must have sparked the memory of Joe Torre, who suddenly realized Ortiz wasn’t on the Mets and therefore removed Myers from the game.

Luis Vizcaino came in to keep the Mets from scoring further in the third, but in the fourth was victimized for two tack-on runs on a double by Delgado and a fielder’s choice by Shawn Green. By then the Mets were tired from so much swinging, and took a break for four innings.

Meantime, Glavine slopped his way through six before Willie Randolph felt bad for his old mentor and team and chose to throw a bone: Scott Schoeneweis. “The Show” gave up a run-scoring single to Derek Jeter in the seventh and back-to-back homers to A-Rod and Jorge Posada to start the eighth. Randolph saw that as a fair amount of runs to give away, and called Pedro Feliciano in to clean up the mess. Instea, Pedro made things more interesting, giving up a run-scoring double to Josh Phelps and putting Yankees on first and third with Jerky Deter at the plate. Aaron Heilman was summoned to put an end to the madness and he retired Jeter on a groundout.

With the Yankees now within striking distance, the Mets decided to get the offense going again. Carlos Beltran walked, D-Wright was walked intentionally, and with the wet weather pulled off a double steal without drawing a throw from Posada. Seeing that Robinson Cano had dropped the ball every time it came near him, pinch-hitter Julio Franco guided a grounder in Cano’s general direction and, lo and behold, Robinson booted it — literally. Cano made a diving stop of the ball, tumbled over and attempted to throw to first while laying on his back, but instead bounced the ball against his foot, allowing both Beltran and Wright to score.

Billy Wagner came on to close out the ninth, but not before giving up two singles and a run on his throwing error. He rebounded though, striking out Cano and Phelps swinging, stranding men on first and third to earn his 11th save.

Endy Chavez went 4-for-5, and is now hitting .390 on the year. My wife would like to know why he isn’t an everyday player, and that’s getting to be a more intriguing question each week.

Jose Reyes stole two bases, and the Mets stole five on the day — including one by Shawn Green that went uncontested.

Delgado was 2-for-5, and looked more comfortable at the plate than he has all year.

The Boston Red Sox whipped the Atlanta Braves 13-3, extending their lead over the Yankees while simultaneously helping the Mets. Nice work, boys.

The series finale pits John Maine vs. Tyler Clippard, who will be making his Major League debut. If it wasn’t bad enough to have to listen to the “smooth as velvet” Joe Buck and eternally annoying Tim McCarver today, tomorrow’s game is an 8:05 PM start on ESPN. I can’t WAIT to hear Joe Morgan tell us about his days with the Colt .45s and similarly inane comparisons to what may or may not be happening on the field.

Back Mets Game 41: Win over Yankees
Next Mets Game 43: Loss to Yankees