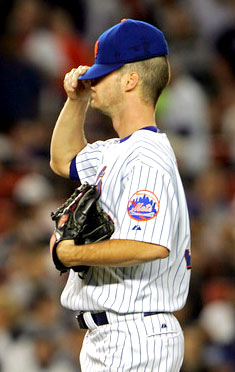 For the second consecutive start, it was not a good day for John Maine. In fact, he appears to be in something of a slump, when you compare his latest performances to the first six starts of the season. It looks like he’s not finishing his pitches, following through near his waist instead of below his knee — as a result the ball is higher in the strike zone than it should be.

Of course, all the number-crunching statheads are running forward now, screaming their “I told you so’s”, pointing at the FIP, BABIP, and other nonsensical numbers spit out by their calculators.

Personally, I don’t need any complex formulas to explain why John Maine pitched poorly — regardless of what the “batting average on balls in play” is. With my two eyes, I saw: Paul LoDuca set up outside, Maine pitches inside. LoDuca set up inside, Maine throws outside. Maine hangs a flat change-up. Maine misses high and out with the fastball when LoDuca’s target is down and in. This visual experience suggests that Maine does not have his command, is missing his spots, and throwing fat pitches that are easy to hit.

Maine’s debacle of a game resulted in: 5 innings, 8 hits, 3 walks, 4 strikeouts, 5 earned runs, 2 homers, 107 pitches. He seemed to go full count on every batter, as the Yankees suddenly remembered how to take pitches. A bad, bad game for Johnny Maine — but he’ll find his way again.

For the Yankees, Tyler Clippard chose his Major League debut to have the greatest day of his life — and it wasn’t even his birthday. It’s amazing what a little bit of confidence can do to propel performance — in addition to his remarkable pitching, he also laid down a good bunt and blasted a double — this from a guy who probably hasn’t had an at-bat since PONY League (actually, he looks like a 15-year-old in PONY League). Clippard should have been knocked out of the game in the second inning, when David Wright blasted an opposite-field homer and then Mets loaded the bases — capped by a walk to the offensively challenged John Maine. Jose Reyes came up and worked a 3-1 count, but could not take advantage and popped out to leftfield. It was the turning point in the game, as it gave Clippard a boost of momentum. Had Reyes come through with a base hit in that situation, I bet my bottom dollar the game would have gone very differently from that point forward. As it was, Clippard retired 11 of the next 13 batters, as the Mets didn’t come close to mounting anything of a threat from innings three through six; it was as if the offense turned their switch to “off”.

Why isn’t Ruben Gotay getting any starts at second base — other than day games after night games? Damion Easley is NOT an everyday player, so there’s no point in exposing his deficiencies day after day, when the Mets have a much better fielder, faster runner, and equal hitter available. I understand Willie Randolph’s thing about playing “his guys” and his trust in the veterans, so it’s fine if he wants to play Easley for the majority of the time. But I don’t understand why the “majority” can’t be 3 games out of every 5, or four games per week, and then giving Gotay more than one start every full moon. This game, with a rookie righthander on the mound, was a perfect opportunity to give Gotay a start.

Jose Reyes is having a difficult time discerning the inside strike lately. He struck out twice looking on inside fastballs in this game, and has struck out looking several other times in the last two weeks on similar pitches.

Scott “The Show” Schoeneweis had a fantastic outing, allowing NO RUNS in his one inning of work. And it only took him two dozen pitches! The Show walked one, allowed one hit, struck out two, and lowered his ERA to six and a half.

Paul LoDuca was 2-for-4, the only Met with more than one hit. Ruben Gotay and Shawn Green both hit doubles, Gotay as a pinch-hitter.

The Alex Rodriguez phenomena reared its ugly head once again in this game. With the Yankees down 1-0 in the top of the third with one out and men on second and third, A-Rod whiffed on three pitches. He did, however, manage to rip a line-drive homer in the seventh when the Yanks were already up 5-1. Rodriguez also hit a solo homer in Saturday’s game, when the Yankees were down 8-3. Oh, and while he had that crazy April, hitting 14 homers and batting .355, his team spent most of the month mired in last place. He might be the most talented player in baseball history, but he’s yet to prove that he’s a winning ballplayer.

There was a point in the game — or was it the entire game? — when Joe Morgan was rambling on about something for several minutes, and I’m certain no one heard a word he said. My guess is that most viewers were like me, and managed to completely tune him out after the top half of the first inning. Hopefully the subconscious mind didn’t pick up and store any of his mindless drivel.

Morgan’s monotony was occasionally broken by the “Boston Bore”, Peter Gammons. ESPN might want to consider playing some soft jazz music in the background, in lieu of paying several non-personalities to provide color commentary (actually, the ESPN team should be termed “pallid commentary”.

Hey, anyone remember Victor Diaz? He’s the guy I thought should have been starting in front of Xavier Nady last year. A bad call, in retrospect, but maybe I was a year off — he went 4-for-5 with two dingers against Houston, and now has four homers in his last five games, batting .308 on the season in limited duty.

The Mets have Monday off, then travel to lovely Atlanta to play the second-place Braves. Tuesday’s game starts at 7:35 PM, and has Jorge Sosa facing Kyle Davies.

Back Mets Game 42: Win over Yankees
Next FREE Mets Tickets !