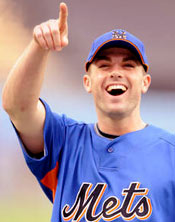 According to zen master Jerry Manuel, Jose Reyes will be the Mets’ #3 hitter — as long as Carlos Beltran is on the DL.

I don’t even want to go into the stupidity of Reyes in the 3-hole, nor the illogical thinking that went into the cause-and-effect relationship of Beltran’s unavailability compared to Reyes’ spot in the order. After all, unless he’s on a rare unconscious streak (such as he had at the beginning of 2009), Beltran’s ideal spot is either 4th or 5th. Further, if Reyes (or Beltran) is batting third, where does one pencil in David Wright?

Logic would dictate that Wright gets a guaranteed plate appearance in the first inning, since he has been, and remains, the Mets’ best hitter and on-base guy. That said, if Wright isn’t slated to bat third, then the next most logical spot in the order would be … first — a.k.a., “leadoff”.

Sound crazy? Not nearly as crazy as plotting Reyes in the three-hole.

Consider that Wright has led the Mets in OBP in four of the last five seasons (the one year he didn’t, he was second by .007 points behind the leader). Nearly every intelligent baseball enthusiast — both old-school lunkheads and modern Beaneheads — agree that the ideal leadoff hitter has a superior on-base percentage, so Wright’s career .389 OBP is ideal for the spot.

Further, there is the notion that someone “speedy” — or at least, a base-stealing threat — should bat in the top position of the order. Again, Wright fits the description — he led the Mets in stolen bases last year with 27, and he averages 20+ steals a year. Further, he routinely scores 100+ runs per year — again, the sign of an ideal leadoff hitter.

Naturally, you wouldn’t want to “waste” a slugger at the top of the lineup (unless his name is Rickey Henderson or Bobby Bonds). Generally speaking, you’d prefer to insert someone who is more of a singles hitter with gap power. And guess what? David Wright transformed into exactly that in 2009! His power outage (10 HR) suggest that he would be more valuable higher in the lineup, in a spot where he can get on base for the sluggers (such as Reyes) to drive him in.

Speaking of, if Wright bats leadoff, then what does the lineup look like?

I know, I know — Pagan was stellar in the leadoff spot in 2009. But really, do you truly expect him to continue to hit over .300 with a .350 OBP and .837 OPS in 2010? If so, then there was no point in signing Bay, and you may want to consider trading Beltran once he proves to be healthy. Additionally, those big numbers still aren’t close to being more fit for leadoff than Wright, whose OBP was 40 points higher last year.

The only other possible argument is Castillo, who has been hinted to be the “new” leadoff batter if Reyes moves to #3. But again, Wright is superior as an on-base guy, and he HAS TO get a plate appearance in the first frame — considering that, would you prefer he bat #2? Of course not! Castillo’s patience and ability to bunt are much more valuable in the two-spot than anywhere else. I don’t think Wright even knows how to spell the word “bunt”, and I wouldn’t want him worrying about advancing Castillo from station to station.

Finally, there is the cockamamie idea that Murphy should bat second. This nonsense is based on Murphy’s first 100 ABs in the bigs, when he was unconscious and posting Wade Boggs-like numbers. But as well all know, Cinderella’s carriage turned into a pumpkin, Kevin Maas turned into a human, and Murphy posted a .313 OBP over a full season. The #6 spot is a much better position than a guaranteed first-inning at-bat.

By the way, I’m feeling “stubborn” about Wright as the leadoff guy. I don’t care who you throw in the #2 spot, it don’t matter.

What are your thoughts?