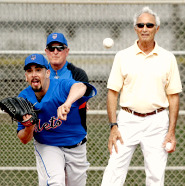 This is a groundbreaking moment in the history of MetsToday.com — we are committing outright blasphemy.

Because today, we take the words of the great Sandy Koufax to task.

In a quote from the NY Post, Koufax had this to say in regard to Oliver Perez:

“People pay too much attention to delivery,” Koufax said. “Pitching is precision throwing. Sometimes delivery is overrated. You don’t want to change what you do. Delivery shouldn’t interfere with your ability to throw. You make it a simple situation so you can retain it. You don’t want it to be something different every time you throw. If I can help somebody I’m happy to. I don’t have all the answers. Nothing works for everybody. It’s a question of trying it. Every pitcher should try everything to find out what works for him.”

But, I cannot, under any circumstance, agree with the notion that “delivery is overrated”. In reality, delivery is EVERYTHING. If a pitcher’s delivery is just an inch off, it can drastically affect his command.

Oh, and I also am not blown away by Sandy Koufax in the role of teacher / coach.

Therein is the blasphemy, in case you missed it.

That’s right — Koufax, to me, isn’t going to make much of a difference with the Mets’ pitchers this year because, to be frank, he’s not a coach. He WAS, however, an outstanding pitcher in his day — maybe, the best pitcher ever. But that alone doesn’t make him a miracle worker as a teacher.

Consider this: how many homerun hitters are the product of training under Hank Aaron, Barry Bonds, or Willie Mays? How many catchers will tell you that everything they learned, they learned from Johnny Bench? Is there one Gold Glove shortstop who learned the position under Ozzie Smith? And how did Jose Reyes do as a leadoff hitter / basestealer under the tutelage of Rickey Henderson? Yeah.

I think you get the point: superstardom does not necessarily equate to skill as a teacher. There is something to the old saying, “those who can, do; those who can’t, teach”.

I bring this up not to throw mud in Sandy Koufax’s face — he is, after all, a legendary pitcher, a beloved Dodger, and great friend of Fred Wilpon. Rather, I want to make clear that Ollie Perez, John Maine, Mike Pelfrey, etc., will not suddenly “get it” or put together a Cy Young performance in 2010 after speaking to Koufax. Yeah, I’m raining on the parade, I’m being negative, I’m squashing the hope that springs eternal this year — and, I’m blaspheming the immortal Sandy Koufax.

But, someone has to even the scales. The “big story” yesterday in every Mets media outlet, and by every beat writer, was the tired, old, and annual Sandy Koufax advice article. We read the same nonsense every spring, with only the names of Mets pitchers changning.

I have no pride, and am fine with smacking the rose-colored glasses off the faces of potential season-ticket buyers. Rip me below in the comments.

Back David Wright Batting Leadoff
Next What, Me Worry?