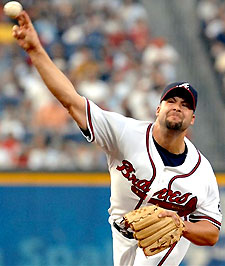 Preferably, the death will be the result of a murder-suicide involving Kelly Johnson.

And speaking of evil deeds, the deal with the devil that Jorge Sosa made finally ran out; apparently he needed a better negotiator.

Maybe it was a matter of returning to Atlanta, and putting too much internal pressure on himself to prove his old team wrong. Or maybe the Braves batters know Sosa better than anyone. In any case, Jorge was awful, allowing 5 runs on 6 hits, 3 walks and one homerun in 4 innings. His highlight was a 1-2-3 first inning, but it was all downhill from there.

Sosa’s bad karma extended to Aaron Sele, who gave up pitcher Kyle Davies’ fifth career hit — which happened to be a 3-run homer that transformed the Braves lead from comfortable to insurmountable.

But it didn’t matter what Sosa (or Sele) did, because the Mets couldn’t hit Kyle Davies. Two days after Tyler Clippard pitched the game of his life, Davies had the greatest game in his (that includes little league, I checked).

Kyle Davies — certainly you’ve heard of him? If you’re in a fantasy league, he wouldn’t be on your team — even in a deep, NL-only league. He had a 5+ ERA coming into this game, and typically has trouble getting past the FOURTH inning (in this contest, he pitched through, ahem, the 8th). The offensive juggernauts known as the Rockies, Nationals, and Marlins have beaten the crap out of Davies — yet against the Mets he’s something akin to a young Jim Palmer. Somebody please ‘splain dis to me?

Davies didn’t look dominating; in fact, the Mets seemed to hit him pretty well. But they couldn’t put anything together with less than two outs, and were often the victims of bad calls or bad bounces.

The sixth inning was particularly painful, and a microcosm of the ballgame. Carlos Beltran led off by hitting a rocket right at Kelly Johnson. Then Carlos Delgado worked himself into what should have been a comfortable 3-1 count, but the home plate umpire screwed ‘los and called a high and outside pitch strike two to make the count 2-2 — he struck out swinging on the next pitch. To top off the inning, David Wright hit a screamer right at Edgar Renteria. In the boxscore, it looks like a simple 1-2-3 inning, and to the sabermetricians, it’s boiled down to BABIP. For those who witnessed it, it’s termed AGITA.

Beltran went the other way for a double to left-center in the 8th — a very good sign, since we haven’t seen him going to left very much this year. Nice to see him going with the outside pitch, rather than trying to pull it.

A bright spot? There was one: Ambiorix Burgos pitched two scoreless innings of mop-up duty. He gave up one hit and struck out one on 22 pitches, with a few clocked north of 95.

The pressure is on Oliver Perez to be the stopper once again. He faces Chuck James in another TBS-derived 7:35 PM start. The Mets banged James around for 10 hits and 6 runs in 5.1 innings the last time they faced him; let’s see more of the same.

Back MetsToday on Rival Braves Blog
Next Giambi Fails Test