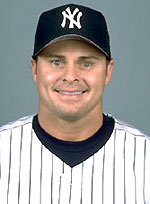 The most-tested baseball player on the East Coast apparently failed.

The Daily News reported that after the failed amphetamines test, Giambi is subjected to six additional tests for one year. We suppose that would explain why Giambi would blurt out that he was “probably tested more than anybody else,” to USA Today.

The Daily News did not cite any sources in its report, and Giambi refused comment.