Willie Randolph was not happy with the productivity of his lineup, so he shook things up. 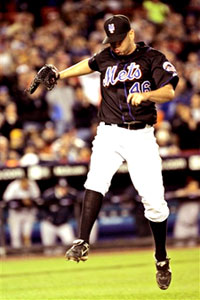 With Shawn Green in the two hole, David Wright batting cleanup, Paul LoDuca behind him in the fifth spot, Carlos Delgado dropped to sixth, and Carlos Gomez batting eighth, the Mets managed to score three runs in the first five innings.

But that wasn’t the only unusual move by Willie. Normally a slave to the 100-pitch count, Randolph allowed Oliver Perez to start the seventh inning, despite having thrown 107 pitches through the initial six. Ollie rewarded the decision by pitching a scoreless seventh, expending 15 pitches in the process. His outing finished up like this: 7 innings, 4 hits, 2 walks, 5 strikeouts, 122 pitches, 81 for strikes.

His stellar pitching was supported by a Mets offense that got back to the basics: taking pitches, getting on base, and executing fundamental situational hitting (placing bunts, hitting behind the runner, etc.). The first run was manufactured in the third inning by a Jose Reyes walk, single by Green, and a double steal that resulted in Reyes scoring when the throw to second base by Atlanta catcher Jarrod Saltalamacchia bounced off second baseman Martin Prado’s leg. In the fourth, Paul LoDuca, Carlos Delgado, and Damion Easley hit consecutive singles to load the bases, and Carlos Gomez popped a sacrifice fly to score Loduca. The Mets scored their third and final run in the fifth when D-Wright went down and fished out a pitch on the outside of the plate, below his knees, and drove it over the 380 mark in leftfield.

After Perez pitched his seven stellar innings, Mighty Joe Smith came on to pitch a perfect eighth, striking out Edgar Renteria and Chipper Jones swinging and inducing a groundout from Jeff Francoeur.

Billy Wagner finished things up by striking out two for this 11th save in 11 tries. Remarkable that Bobby Cox allowed Chris Woodward to face Wagner as the last out in the game.

Paul LoDuca remains red-hot, stroking an opposite-field single and pulling a double down the leftfield line.

The drop in the lineup did some good for Carlos Delgado, as he had two hits — one to left-center and the other to left. It was absolutely baffling to see the Braves infielders all lined up to the right of second base when Delgado came up, yet also see the pitcher continously pound the outside part of the plate. Kind of counterintuitive, dontcha think?

You have to like the hustle and raw talent of Carlos Gomez. However, he’s defintely a product of the Dominican adage, “you don’t walk off the island (you hit your way off of it)”. Gomez swings at just about everything he can reach — and he manages to make contact. When and if he learns to be a bit more selective, he’ll be a bonafide superstar. If he doesn’t … well, Vlad Guerrero and Jeff Francoeur have done OK with a similar approach.

Something I’ve noticed about Oliver Perez in his last two starts: when in the windup, he often makes an exaggerated pause at the top of his leg lift, getting his balance and gathering his power, before exploding to the plate. Watch closely and you’ll see what I’m talking about. When he makes the pause, he seems to be in more control of his body, and has a more controlled follow-through. If he doesn’t take the pause, the pitch is rushed, and he ends up flailing out toward third base. I wonder if Rick Peterson has established the top of his leg lift as a checkpoint, and is helping Ollie stay consistent with his mechanics.

Lately, Jose Reyes is being overly aggressive on 1-0 and 1-1 counts, particularly with runners on base. As a result, he’s chasing pitches he should be taking — balls that could be putting him into very favorable 2-0 and 2-1 counts. Instead, he’s digging himself into 1-2 holes and having to take defensive swings. He’ll need to get back to his patient ways with runners on if he’s going to continue driving up the RBI total.

Perez, by the way, touched 95 a few times during the game. That’s gas, and nearly unhittable with his movement.

Tom Glavine goes for win #296 while John Smoltz tries for #200. MetsToday reader Sincekindergarten believes that Glavine is too proud and too competitive to allow best friend Smoltzie to win his 200th against him. Let’s hope he’s right. Game time is 7:35 PM.

Back And the Winner is …
Next Last Call for Todd Walker