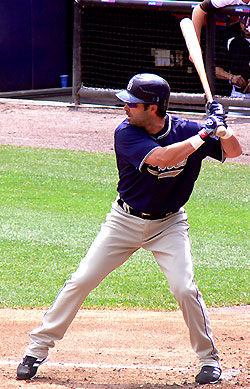 As of Monday, Todd Walker is retired — but he admits that could change.

With reports that Jose Valentin won’t be ready to rejoin the Mets for at least another month (or possibly longer), and Willie Randolph completely uninterested in using Ruben Gotay in anything other than a Wednesday afternoon game (and there’s a solar eclipse, and Mars is in line with Uranus), wouldn’t it make sense to give Todd Walker a call and see if he’ll tie up the spikes for a few more months?

I know, we’ve covered this story before, but Walker’s 10-day assignment is now complete, and he’s a completely free agent. No players have to be traded, and the contract can be miniscule (he’s already collecting paychecks from both the A’s and the Padres). He can play second base, first base, and third in a pinch, and he’s a professional hitter. There’s nothing wrong with his offensive skills, evidenced by his .271 average with the A’s and the .288 line he compiled with the Padres in the last 44 games of 2006. His limited range at second base is no worse than Easley’s, he’s sure-handed, and he can turn the double-play fairly well. Further, he’s a tough son-of-a-gun, and known to be a great clubhouse guy. Oh, and that .370 average in the 2003 ALCS vs. the Yankees would sure come in handy when the postseason arrives.

Considering that Randolph is committed to playing Easley for a full nine innings every day, there’s no point in Gotay wasting a roster space. If Gotay were being used appropriately — as a late-inning defensive replacement — then there would be no discussion regarding Walker. But since Gotay’s role is as a pinch-hitter and rare second-base starter against righthanders … well, is there any available player on the planet more qualified than Todd Walker? I’m a big Gotay fan, but if we’re in the heat of a September pennant race, and the Mets need a big hit in a key situation off a tough righty late in a ballgame, I’d much rather see Walker at the plate than Ruben.

Enough with the dilly-dallying, Omar — call Todd Walker today and get this done! (And Carlos, get those shears humming!)

Back Mets Game 45: Win over Braves
Next Mets Setup Man