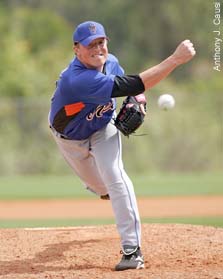 In last night’s 3-0 shutout of the Braves, Willie Randolph chose Mighty Joe Smith to pitch the eighth, bridging the gap between the outstanding start by Oliver Perez and the 11th consecutive save by Billy Wagner.

At the beginning of this year, Aaron Heilman was the setup man / eighth-inning guy, but he’s had some issues with the long ball of late.

Willie Randolph has also auditioned Scott “The Show” Schoeneweis and Pedro Feliciano in the role, but the results have been mixed. As much as Willie would like to be able to use one or both of those guys for a full inning, it’s becoming more apparent every game that neither is capable of being more than a situational lefty / LOOGY. The Show is quickly pitching himself into Aaron Sele’s mopup role, and has been an extreme disappointment. And, as well as Feliciano has performed, he seems to lose effectiveness after facing two batters.

Enter Joe Smith, the sidewinding rookie who went from spring training invite to unlikely MLBer to now one of the most trusted arms in the New York Mets bullpen. That’s quite an accomplishment, considering Randolph’s tendency to trust his “veteran guys” in critical roles. But so far, Smith has more than fulfilled the “show another look” role (a.k.a. “bring the funk”) vacated by Chad Bradford.

Personally, I didn’t think we’d see Smith pitching 8th innings in tight games for at least another month — based on Willie’s reluctance to trust rookies. But I’m glad to see him in there, and right now have more faith in Smith than I do Heilman (that’s saying something, considering my three-year platonic man-crush on Aaron).

In a few weeks, Guillermo Mota will also be available as a setup option, but until then, it’s going to be a mix of Smith, Heilman, Feliciano, and possibly Amby Burgos — though it would take serious fatigue of the first three before we saw Burgos in a tight situation.

What’s your opinion? Vote in the pollbooth to the right, and leave your comments below.

Back Last Call for Todd Walker
Next Mets Game 46: Loss to Braves