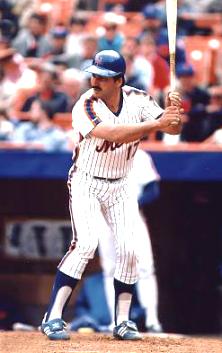 During the Thursday night TV broadcast of the Mets-Braves game, there was a discussion about the All-Star game, and how it means less now than it used to, for several reasons. One of the points brought up by Keith Hernandez was that the game lost a lot of its importance when the fans were given the vote, “and then it became a popularity contest.”

Keith went on to say, ” … I made the All-Star game five times, and should’ve made it eight or nine …”

That’s the Keith we know and love!

First of all, let’s establish the fact that I enjoy listening to Keith do the games, and find his inflated impression of himself kind of lovable, in both a sad and humorous way (it used to irritate the heck out of me, but Ron Darling’s presence has somehow fettered it).

Now Keith, do you REALLY think you should have been an All-Star starter EIGHT or NINE times in your career? C’mon, bro …

Keith was a starting first baseman in the NL from 1976 to 1987 — a total of twelve seasons. Keith thinks he should have been the All-Star starter in at least nine of them. Let’s take a look the NL All-Star teams over that span (the starting first baseman is in parentheses). BTW, the stats quoted are for the full year — not the perfect indicator, as the All-Star game occurs midseason, I know, but it’s the best we can go on for now. Also, the statheads can spend a few hours poring over all kinds of crazy stats and come up with more detailed comparisons, but understand that back in those days, the only numbers anyone found meaningful were batting average, homeruns, and RBI. It was a much simpler time then.

1979 (Hernandez): He was the co-MVP with another first baseman, Willie Stargell. But Keith had better all-around numbers. Decision: Keith

1980 (Garvey): Another good year for Keith — .321/16/99 — though Garvey was right there with him (.304/26/106). It could go either way, and Garvey was the starter primarily because the game was in Los Angeles, and the rabid Dodgers fans wanted to see their Stevie. Though Keith hit 17 points higher, I’m not sure he was deserving over Garvey. Decision: Garvey.

1985 (Garvey): The game was in San Diego, so the hometown fans stuffed the ballot box for Steve Garvey. He was at the tail end of his career at that point, and probably didn’t deserve to be the starter. Keith went .309/10/91, and was probably the best first baseman in the NL that year. However, Jack Clark (.281/22/87) had a big season for the Cardinals, and Mike Schmidt (.271/33/93) played over 100 games at first base that season. We can probably give Keith this one. Decision: Keith

So in the end, Keith deserved to be the All-Star starter a total of four times, and that’s giving him a questionable 1986. Whether he deserved to be on the roster (chosen by the NL manager) is another matter, and may be fodder for a future discussion.

BTW, you can see all the All-Star teams at Baseball Almanac.

Back Series Preview: Mets vs. Marlins
Next Mets Game 47: Win over Marlins