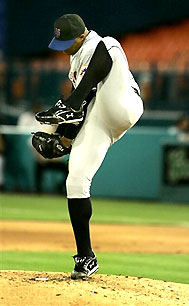 This game was a lot closer than the final score tells. In the end, it was the Mets who were a little less lazy than the Marlins.

For seven innings, there was no score, as Orlando Hernandez and Sergio Mitre traded goose eggs. El Duque, in his first start since April 24th, was magnificent, pitching six shutout innings and allowing only two hits, walking none, and striking out four. After allowing a base hit to Alfredo Amezaga in the first, Hernandez retired the next 17 consecutive batters. Ironically, it was Amezaga again who broke the streak, singling in the sixth. If Reggie Abercrombie started in center, El Duque might have pitched a no-hitter.

Mitre was not nearly as dominating as El Duque, but kept the Mets from scoring. He allowed 8 hits and a walk in 7 2/3 innings, striking out 8. The Mets might have scored at least twice — had they hustled. Maybe it was a combination of getting into Florida at three in the morning and then having to deal with the heat and humidity, but whatever the case, the Mets did not come to the game ready to compete at a high level. They were lackadaisacal, both in the field and at bat. Perhaps the ban on greenies is having a negative effect on the sport?

The most glaring example came in the seventh inning. David Wright led off, and bounced a ball down the first base line. At first, it looked as though it would roll foul, but eventually took a funny hop and found its way into first baseman Aaron Boone’s glove. Wright did not run out of the box, assuming it a foul ball, and was put out easily. The next batter, Carlos Delgado, mashed a ball off the leftfield fence, but because he had not been running hard, was thrown out at second base. Replays showed that Delgado got his hand in, but the fact was, it shouldn’t have been that close; had Delgado run hard out of the box and through first base, he’d have gotten to second standing. Right there the Mets should have been up by one, because even if Wright had not scored on Delgado’s double, the red-hot Paul LoDuca followed with a base hit that might have scored both Wright and Delgado.

As if that weren’t enough, in the bottom of the next inning, Carlos Beltran slipped and fell while tracking down a line drive off the bat of Miguel Olivo. Fine, that happens, but Beltran’s lazy reaction to hunt down the ball allowed Olivo to get to third, and he eventually scored the tying run (at the time) on a sac fly.

Luckily, the Mets woke up in the 9th, scoring five runs, topped off by a Beltran double with the bases loaded that scored two runs. Until then, though, it could have gone either way.

Billy Wagner had a very shaky ninth to finish the game; Aaron Heilman — who allowed the tying run to score in the 8th — stole his fifth win.

Two remarkably nonsensical moves by Willie Randolph: first, he leaves Damion Easley in the game in the ninth inning while Ruben Gotay’s much better glove rests on the bench. As a result, Easley was too slow in charging a ground ball by Olivo, and allowed Olivo to earn an infield hit. Granted, the hit meant nothing, but that’s not the point; why wasn’t Gotay in the game?

Secondly, the decision to allow Wagner to pitch the ninth. Historically, Wagner does not do well with big leads, for whatever reason. Once the Mets jumped ahead by five, Wagner should have sat down and Amby Burgos or Aaron Sele gotten warm. I understand the timing issue, but there would have been enough time to get Burgos ready — he’s a professional, for goodness sakes. Instead, Wagner went out there in a non-save situation, ended up tossing 32 pitches, and likely won’t be available for Saturday night’s game.

Joe Smith pitched a perfect seventh, striking out one.

Carlos Delgado continues to be tepid, going 2-for-3, with both hits smacked to leftfield.

Paul LoDuca is on fire; he had four hits in five at-bats, and is now batting .329. Time to move him back to the second spot?

Jose Reyes continues to struggle; he’s swinging at everything, swinging early in counts, and looks like he’s regressed by two years.

Shawn Green fouled a ball off his foot, cracking a bone, and may be out for the next few games. That will likely buy Carlos Gomez a few more days on the roster — and perhaps a few more starts.

David Newhan was called upon to bunt in the 8th, got a great pitch to handle, and doinked it right back to the pitcher, who easily threw out Damion Easley at second. If Newhan can’t hit for average, can’t bunt, doesn’t steal bases (despite supposedly good speed), and isn’t being used for defensive purposes … well, what is his role on the team?

John Maine faces Wes Obermueller in a 7:05 PM start. Time for Maine to get back on the horse and give the Mets a solid six innings. Also time for the bats to get busy.

Back Keith Hernandez: 9-time All-Star?
Next Inside Look: Florida Marlins