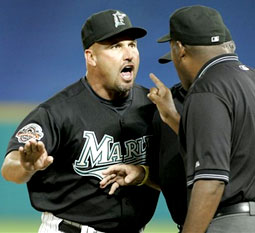 Much about the Marlins has changed since the last time the Mets faced them. They’re beginning to take on a new character under first-year manager Fredi Gonzalez. We asked Craig Strain from the popular Florida Marlins blog FishStripes to offer some insight on the young, up-and-coming team.

1. What is your opinion of Fredi Gonzalez? How does his style differ from Joe Girardi’s? Do you think Gonzalez is a good fit for the current Marlins players?

I think Fredi is doing a good job but he is still getting his feet wet as a rookie manager. The problem that has happened so far is that the team has had a lot injuries this season. It’s one thing to be first-time manager. It is completely another to be one when the personnel keeps changing. Fredi has handled the situation about as good as can be expected.

Girardi was an introvert and a strict disciplinarian. He was basically a drill sergeant in style. Fredi is an extrovert and his more like everyone’s favorite uncle.

Gonzalez appears to relate well with the players and by all accounts, I have seen, they enjoy playing for him. Also, he gets along real well with the front office which is something Girardi never did.

2. Today, the closer appears to be Kevin Gregg. How long will that last, and who are the other options? Will Byung-Hun Kim be considered, or is he more needed in the rotation?

te>Gregg will be the closer for some time to come. When Owens returns, possibly this weekend, he will be worked in slowly and could regain the closer’s role later in the season. Gregg is very versatile, he has the ability to start, if necessary. If Owens shows he is back to form, then Gregg could end up being more valuable in another role. Other options to close are Lindstrom, Tankersley and maybe Messenger if Gregg falters and Owens is not ready.

Kim will stay in the rotation for now and he wants to be a starter. Eventually, hopefully, some the starters return from the DL and if they are up to speed Kim will be bullpen-bound. No one has mentioned him as a closer candidate, at this point. And assuming the closer at the time is getting the job done, I doubt he will unseat them from the position.

3. Some Mets fans were unhappy to see Henry Owens and Matt Lindstrom go to the Marlins during the offseason. Have they impressed you? (I realize Owens is hurt now)

I am very impressed by the two pitchers. Owens was the Marlins closer before going on the DL and he was doing an excellent job before the injury. Lindstrom has promise written all over him and he is really improving as a pitcher. Initially he was just relying solely on his fastball and as you know velocity isn’t enough by itself. But as the season has gone on, he is gaining confidence in his breaking stuff, mixing his pitches, and becoming more effective.

4. Randy Messenger pitched a key inning against the Mets the last time these two teams met. Has he been as dominant since? Who else do you trust out of the bullpen?

Contrary to what the Mets announcers were saying last night and the ninth inning disaster aside, the bullpen has been very effective this season. Although they are seeing way too much work so far, but the starters are getting their act together and going deeper in the games recently. Now that Jorge Julio is gone, I don’t cringe when any of the relievers take the mound.

6. The Marlins are 6 1/2 back at this point, but there is plenty of season left. What will be the key for them to rise to the top of the standings?

Get healthy and stay that way. The Marlins have 60 percent of last year’s rotation presently on the DL. Not to mention they are joined there by the closer, the starting first baseman, two other relievers, the starting and backup center fielder. Last year’s right fielder just recently returned to the club.

It has been the season of the injury thus far. The fact that the Marlins are hovering around .500 is a testament to depth of their bench and the organization in general.

If the team can get all the players back, then they could make a run for the playoffs. But honestly, I’ve seen no signs of this happening.

Thanks again to Craig for his thoughts. Be sure to visit FishStripes to get all the scoop on the Florida Marlins.

Back Mets Game 47: Win over Marlins
Next Mets Memorabilia