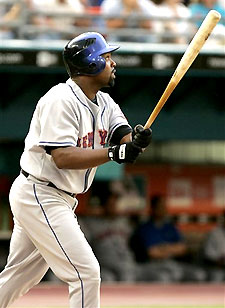 Great news for Mets fans: Carlos Delgado is back to his old self, and John Maine has his “luck” back as well.

Maine pitched six solid innings, allowing four hits, two runs, striking out 8 and walking four. Yes, he walked too many — again — but otherwise did a fine job of keeping the Marlins bats in check.

Meantime, Carlos Delgado chose his former team to unleash his season’s frustrations, homering twice and driving in five runs. His two-run homer in the third gave the Mets a comfortable 4-1 lead, and his three-run blast in the fifth put the game away for good. With Maine mowin’ ’em down, the Mets up by six, and a hard rain falling, the Marlins were like a fish out of water.

While Delgado went 3-for-5 with 5 RBI, Endy Chavez also went 3-for-5 with a triple, a run, and a stolen base. Chavez was also thrown out stealing to end the top of the fourth. A curious decision, as John Maine stood on third base with Carlos Beltran batting. It’s good to be aggressive, but you don’t want to take the bat out of your top RBI man’s hands with a runner on third and two out.

Paul LoDuca stole his second base in three games, and went 1-for-3.

Jose Reyes is still cool, though he managed one single and stole his 27th base of the year.

David Newhan started in leftfield and batted eighth, and went 1-for-4.

The Mets will go for a sweep on Sunday afternoon, sending Jorge Sosa to the mound against Scott Olsen. It’s a 1:05 PM start.

Back Mets Memorabilia
Next Game 49: Win over Marlins