What’s that sound? Can you hear it? It’s a swishing … no, SWEEPING sound … 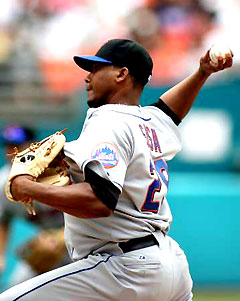 Jorge Sosa rebounded from his poor start in Atlanta to throw one out short of six strong innings, allowing two runs on five hits and a walk. He didn’t get as many swings and misses as he normally does — striking out only two — but was fairly efficient, throwing 87 pitches (57 for strikes).

Sosa was supported by good defense, in contrast to the Marlins, who were a bit shoddy in the field. A key play came in the fourth, after Carlos Delgado singled in an RBI to tie the game at one. Delgado followed David Wright on a double steal to put runners on second and third, and Damion Easley hit a slow roller to Dan Uggla, who oddly had been playing back. Uggla rushed the throw, it ended up bouncing off Easley’s foot, and both runners scored. Florida pitcher Scott Olsen then uncorked a wild pitch to Ramon Castro, sending Easley to second, and one batter later Endy Chavez singled in Easley to make the game 4-1.

An inning later, David Wright doubled in Beltran to extend the lead to 5-1. The Marlins scratched out a run in the bottom of the fifth, but the Mets went up 6-2 in the eighth thanks to a pinch-hit RBI single by Julio Franco.

Aaron Heilman gave up a run on a double by Miguel Cabrera, narrowing the gap to 6-3, and Billy Wagner allowed a solo homer to Miguel Olivo to make it 6-4.

Back in the first inning, with Jose Reyes on third in a 0-0 game, the infield was drawn in. As it turned out, Uggla cut off a slow grounder by Carlos Beltran to strand Reyes on third. Since it was a 1-1 game in the fourth — essentially the same situation — it seemed strange that Fredi Gonzalez would play the infield back; even the first and third basemen were back.

In the bottom of the third, Scott Olsen’s follow-through on a swing and miss pushed him over home plate with Reggie Abercrombie running, and Ramon Castro was unable to make a throw over him. No obstruction call was made, and should have been — regardless of whether Olsen’s impeding follow-through was intentional or not. The MLB rulebook states:

(a) Offensive interference is an act by the team at bat which interferes with, obstructs, impedes, hinders or confuses any fielder attempting to make a play. If the umpire declares the batter, batter- runner, or a runner out for interference, all other runners shall return to the last base that was in the judgment of the umpire, legally touched at the time of the interference, unless otherwise provided by these rules.

Damion Easley made his first Major League start in leftfield because Shawn Green has a fractured foot and Carlos Gomez strained his hamstring in last night’s game. Despite his inexperience, Easley made two fine catches on challenging line drives in the bottom of the sixth — one a steaming line drive off the bat of Miguel Cabrera, the second a deep fly by Josh Willingham. They might have been routine plays for a full-time outfielder, but for someone who rarely plays out there, they were tougher than they looked. Those simple catches were huge, as they came with runners on first and second, score 5-2, and Sosa struggling. Either of the drives could easily have been misplayed into a double, turning it into a one-run game.

Willie Randolph considered playing Paul LoDuca in leftfield, to keep his hot bat in the lineup, but resisted, feeling it more important to give him a full day of rest.

The Mets have Memorial Day off and will travel back home to Flushing to face the San Francisco Giants in a three-game set. Tuesday’s 7:10 PM start will have rookie phenom Tim Lincecum facing Oliver Perez.

Back Mets Game 48: Win over Marlins
Next Preview: Mets vs. Giants II