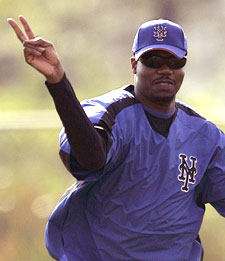 There’s at least one pundit pleading that Mets fans who cheer Guillermo Mota and boo Barry Bonds are hypocrites.

Actually, just about every media outlet looking to stir up a story and have little other material are belaboring this point.

Not to worry, Mets fans: you are NOT a hypocrite if you boo Barroid and clap for Guillermo.

There are two reasons it’s OK to cheer Guillermo Mota. First, he admitted to, and owned up to his mistake, apologized immediately, and did his time. Personally, I’m strongly — no, vociferously — against the use of performance-enhancing drugs in our national pastime. At the same time, I’m just as human as Mota, and have had my hand caught in the cookie jar (not for steroids, but for things like speeding on the Garden State Parkway). What is it that the bible states? He without sin may cast the first stone?

I was greatly disappointed to find out that Mota was on steroids during his remarkable run at the end of last summer, and somewhat surprised the Mets gave him a multiyear contract. However, he’s one of the first players caught redhanded to openly admit to his mistake — and there’s something to say for that. It’s bad enough that scumbags such as Rafael Palmeiro are caught cheating, but to then not only claim he didn’t “know”, and then finger a teammate for giving him a “B-12 shot”. Please. Be a man, admit your mistake, and work on regaining your respect.

The second reason it’s OK to give a hand to Guillermo Mota is because he’s one of our Mets, and as such deserves some unconditional support. We know he did bad, he knows he did bad. He did the crime, he did the time, and now he’s on our team for the next year and a half. Does it help the Mets, or Mota, to boo him? Of course not. If you’re a diehard fan, you want Mota to get beyond this black cloud as soon as possible. It’s not easy being the first MLB player to admit taking steroids, so why not give him at least a golf clap, to let him know that despite what he did, that’s in the past and we’re behind him going forward. He doesn’t need — nor deserve — a thuderous, standing ovation. But a nice little cheer will do wonders for his psyche.

Now, let’s discuss Barroid, and why it’s OK to boo him.

First of all, there is the FACT that he’s done steroids. I am sick and tired of hearing Jon Miller, Rob Dibble, Kevin Kennedy, and every other ass-kissing head-in-the-sand jackass who asserts that Barry never admitted to doing steroids, and has never failed a drugs test. PUH-LEEZE, people … do you really expect us to be that stupid? Or are we to believe that YOU are that stupid? Please STOP with the, “oh, barry admitted to perhaps taking arthritis cream, flaxseed oil, or some other perfectly legal supplement, but had no idea he took any illegal steroid.” STOP. STOP STOP STOP STOP STOP with the absolute stupidity. Barry Bonds gains 25 pounds of muscle in a five-month offseason, his head increases by three sizes, he loses all his hair, and hits 73 homeruns at age 36, and you can look people in the face and say he did it naturally? C’mon!

Even if you didn’t read Game of Shadows: Barry Bonds, BALCO, and the Steroids Scandal that Rocked Professional Sports

“>Game of Shadows — which was too strange to be fiction — you have to know that Barry Bonds did steroids. And, if you know anything about Barry Bonds, you know implicitly that Bonds would never put anything in his body unless he knew exactly what it was. He did steroids, or HGH, or something else, plain and simple. Yet he continues to deny it, and assume that we the fans are that stupid to believe that a man could possibly get bigger, stronger, faster, and have better eyesight as he gets closer to 40, while every other human being on planet Earth regresses during the same age span. If his name were Steve Austin, and he were a retired astronaut, that’s one thing. But he’s not, and he’s a cheater, and he has the audacity to assume that we the people will buy his sales story that he built himself into the most prolific homerun hitter of all-time thanks to some extra time in the weight room. Sorry, pal.

And that’s why it’s OK to boo Barry: because he assumes that you, the fan, are that stupid and gullible. He hasn’t been caught with his hand in the cookie jar, but believes that we should acknowledge and respect what he does despite the fact that there are chocolate chips stuck to his cheeks. Personally, I don’t enjoy being the butt of a joke, or looked at as the donkey. Further, I don’t enjoy my face being rubbed in someone else’s feces — particularly when that feces is presented as solid gold.

So if you’ll be at Shea this week, feel free to boo Barry and cheer Guillermo — you have justification for both actions.