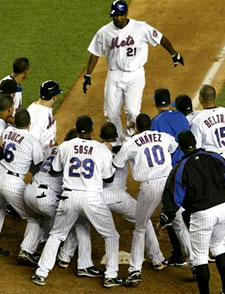 Oliver Perez pitched seven solid innings, and gave up three solo homers. Looking at it, it was a very good performance — he gave up only five hits total, walked none, and struck out 8 in throwing 98 pitches over the 7 frames. It’s safe to say that Ollie has regained the form that made him one of the most coveted young lefties in MLB in 2004.

The three Giant dingers were answered by Carlos X two production: a two-run homer by Carlos Delgado and a one-run double by Carlos Beltran. The score remained that way through 12 innings, when San Francisco broke through with a run against Mighty Joe Smith on a groundout to untie the game. However, Giants manager Bruce Bochy thought it appropriate to give the Mets a fair chance in the bottom of the inning, and sent Armando Benitez to the mound.

Predictably, Benitez had a meltdown. It began with a walk to Jose Reyes, who was balked to second base and then moved to third on a sacrifice bunt by Endy Chavez. Benitez balked for the second time in the inning to score Reyes with the tying run. Five pitches later, Carlos Delgado mashed his second homerun of the game to win the contest for the Mets, 5-4.

Reyes and Delgado scored two runs each, and Beltran scored the other Met run.

Aaron Heilman pitched one and a third innings of perfect relief before allowing Smith to scavenge the victory. Heilman squeaked the Mets out of tough spot in the 10th, getting Rich Aurilia to line out with Barry Bonds standing on third base with the go-ahead run.

The Mets had only six hits on the night, and the suddenly hot Delgado had two of them (plus 3 RBI).

Carlos Gomez started in rightfield and was hitless with two strikeouts, and Ben Johnson took over and went 0-for-2. Johnson was added to the roster when Shawn Green was put on the DL for the first time in his 15-year career.