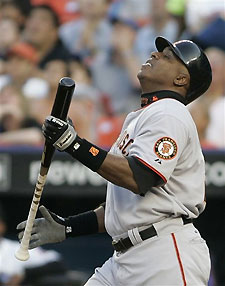 Orlando Hernandez had some first-inning issues, giving up a leadoff single, a triple, and a sac fly to give the Giants a quick two-run lead. However, the Mets matched that output in the bottom of the inning, then added another two in the second to give El Duque a lead and a cushion. From there, Hernandez went into cruise control, mowing down the Giants with ease.

El Duque finished seven full innings, allowing just two hits, two runs, one walk, and struck out three, using 95 pitches in the process. Mighty Joe Smith pitched a perfect eighth (13 pitches, 10 for strikes), and Billy Wagner spun another 1-2-3 ninth to close out the game and earn his 13th save.

All the action of the game occurred in the first two innings. After the Giants jumped out to the two-zip advantage, Jose Reyes (who else?) began the response with a leadoff walk, steal of second, was advanced to third on a grounder, then scored on an infield single by Carlos Beltran. Two batters later, Beltran was chased home on a double by David Wright to tie up the game.

In the second inning, Damion Easley led off with a double, Ben Johnson walked, both were pushed ahead another base by an El Duque bunt, and Jose Reyes drove home Easley with the go-ahead run — the result of a finely fought at-bat. Reyes was caught stealing on the next pitch for the second out, but Endy Chavez dumped a bunt down the third base line that scored Johnson for the insurance run.

Jose Reyes is getting back to watching the ball longer, and as a result having better at-bats. His at-bat in the second inning was particularly good, as he worked the count full, then took a defensive swing on a pitcher’s pitch on the low outside corner of the plate, and poked the ball into leftfield to drive in the go-ahead run.

In the first, Carlos Delgado hit a bomb to dead center that would have been a homer had the wind not knocked it down. He’s seeing the ball fairly well now and taking good, healthy cuts. That’s bad news for National League pitchers, good news for the Mets (and my fantasy team). 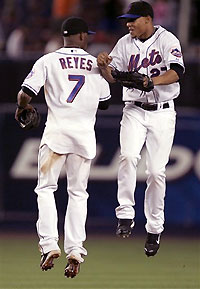 Carlos Beltran injured himself in a collision with first baseman Rich Aurilia in the first. Beltran eventually scored on the double by D-Wright, but was replaced the next inning by Carlos Gomez.

Gomez is incredibly aggressive, and will need to become more selective if he wants to stay up in the bigs.

Ben Johnson got his first start since being acquired by the Mets. He had a sharp basehit to center in the fourth and walked, going 1-for-2 with a run scored.

The Arizona Diamondbacks come to town, sending Brandon Webb to the hill against John Maine in a battle of sinkerballers. Game time is 7:10 PM. I’ll be in the Loge, Section 20, if you want to stop by for some free peanuts.

Back Mets Game 51: Loss to Giants
Next Inside Look: Arizona Diamondbacks