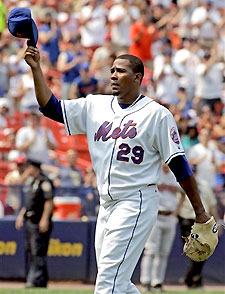 Jorge Sosa was brilliant again, spinning six and two-thirds innings of five-hit, one-run ball, striking out 4 and walking one in the process. His only mistake of the afternoon was a third-inning solo homer by Eric Byrnes.

Joe Smith came on in the top of the seventh to strike out pinch-hitter Alberto Callaspo on four pitches to finish off the inning. Callaspo never took the bat off his shoulder.

The Mets mustered three runs in the fourth inning against Livan Hernandez, who otherwise threw a strong game — it was reminiscent of John Maine’s performance on Friday night, in that he pitched well enough to win, but didn’t, mainly because of one bad inning.

Carlos Delgado tied the game with a leadoff homerun in the fourth — a mighty, high blast that bounced off the Pepsi sign beyond the rightfield fence. Livan Hernandez had a hard time after that, allowing five hits in all in the inning — including a one-run single by David Newhan to untie the game, and a sac fly by Ben Johnson to make the score 3-1. After the fourth, though, Hernandez settled down, not allowing a run through the sixth.

In the seventh, however, the Arizona relief corps took over. Situational lefty Doug Slaten induced a groundout by Endy Chavez but then gave up a walk to David Wright and a double down the leftfield line by Delgado — who did a nice job of spoiling a 1-2 pitch off the outside part of the plate and bouncing through the big hole left by “the shift”. Slaten was replaced by Juan Cruz, who struck out Ramon Castro for the second out of the inning. However, he fell behind Ruben Gotay 2-1, then hung a slider that Gotay deposited over the rightfield fence for a three-run homer.

Joe Smith retired two more batters in the eighth before yielding to Pedro Feliciano to finish off the inning and the game.

Delgado went 2-for-5 on the day; he’s getting good cuts when ahead on the count, and using the whole field. Everything looks in sync with his mechanics, he’s being more patient, and he appears much more comfortable and confident than he did two weeks ago.

Gotay went 3-for-4 with 3 RBI and 2 runs scored. Is that enough for Willie Randolph to give him more than two starts a month? It would be REALLY nice to see what this kid can do with a weeks’ worth of starting, before Jose Valentin comes back. But of course we’ll likely continue to watch sourpuss Easley frown around second base for the next few weeks.

Carlos Gomez entered the game as part of a double switch with Feliciano, and hit a line-drive single in the eighth, then stole second. Though he swings at nearly everything, it will be somewhat sad to see him go back down when Moises Alou and Shawn Green come off the DL — his enthusiasm, energy, and excitement factor are quite like a switch-hitting shortstop we all know and love.

Speaking of, Jose Reyes hit the ball hard three times without earning a hit, before hitting a triple in the 8th that chased Gomez home. He’s hot again, and the numbers will bear that out in due course.