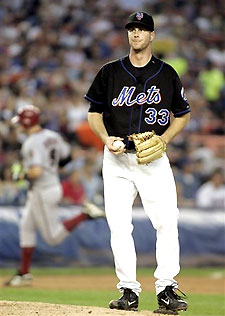 Poor John Maine threw a fine ballgame, but had a AA-level offense supporting him.

Maine threw six strong innings, allowing five hits, two runs, and no walks while striking out seven over 103 pitches, 68 for strikes. He made one mistake in the ballgame: a meatball to catcher Chris Snyder — a guy who is barely hitting his weight — that was inexplicably deflected into the bleachers.

Who is Chris Snyder? Think of a young Mike DiFelice, or Sal Fasano. In other words, not a guy who should be belting a two-run homer off of John Maine. But that blow sealed the game for the D’backs, who rode behind the spectacular pitching of Brandon Webb to win the game.

Although, it wasn’t like Webb was facing Murderer’s Row. With Carlos Beltran out, and Shawn Green and Moises Alou still on the DL, the Mets outfield was comprised of David Newhan, Endy Chavez, and Ben Johnson. To make matters worse, Willie Randolph thought it a fine time to rest David Wright — apparently he forgot that Beltran would not be playing. The resulting starting lineup looked more like the Binghamton Mets than the one from Flushing, and was picked apart easily by Webb’s array of sinkers and change-ups.

The Mets offense never got anything started; the first time their leadoff man reached base was the ninth inning, when Endy Chavez walked. Guess what, folks: if you can’t get the first batter on base in any inning, and you have few homerun hitters in the lineup, it’s going to be REALLY hard to score runs. That the Mets scratched out one run — on a pinch-hit single by Ruben Gotay in the eighth — was something of a miracle.

Though Julio Franco made some nice plays at third base, worked a walk, and stole a base, it’s confounding that this would be the night David Wright was given a rest, considering that Beltran would be sitting. As soon as the lineup was announced — with Damion Easley batting third — it was assumed that Willie Randolph had planned this to be a “giveaway game” to the Arizona ace. It was like, “ah, heck, Webb is great, we’ve got guys licking their wounds, let’s just put all the bench guys out there and cross our fingers.”

Hopefully, the NL East will be decided by more than one game; otherwise, this will be one of the contests we’ll look back on and say, “what was Willie thinking?”

David Newhan is becoming less and less useful to this ballclub. It’s apparent that he is not much of a pinch-hitter, and he can’t get his stroke going with one start per month (who can?). The whole point of having Newhan around was that he was versatile, fast, and could get the bat on the ball. Well, let’s see … he hasn’t played anywhere other than two starts in leftfield, he hasn’t been on the bases enough to utilize his speed, and not only does he swing and miss too often, but he can’t even get bunts down. So why haven’t we cut him and signed Todd Walker yet?

Look, I like Newhan’s scrappy play and personality and speed and versatility and blah blah blah, but if Willie isn’t going to make use of all these positives — if he’s going to use him strictly as an early pinch-hitter and a blue moon starter — then what’s the point? You may as well carry a Todd Walker or a Ruben Sierra instead.

Since Newhan rarely gets starts, I understood why he started in leftfield. However, with so many bats absent from the lineup, I might have put Easley out there and started Gotay at second to get a little more pop. But then, Randolph is of the assumption that Newhan can hit and Gotay can’t.

Guillermo Mota was dominating until allowing a three-run homer to Stephen Drew in the eighth. He may have simply been tired — either mentally or physically. His fastball had good velocity and good movement, and his changeup was pretty nasty.

The Braves picked up a game on the Mets by beating the Cubs in a game that featured dugout fisticuffs between pitcher Carlos Zambrano and catcher Michael Barrett.

Jorge Sosa matches up against Livan Hernandez in a 1:10 PM start. Let’s hope that slider of Sosa’s is working. More importantly, let’s hope the Mets can muster more than a few hits against Hernandez.