These are the games the Mets are supposed to pull out, one way or another. 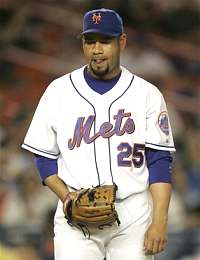 As mentioned yesterday in our series preview, the Glavine vs. Moyer soft-toss-fest could go either way, and indeed that’s the way the game went. Both pitchers threw masterful games, keeping batters lunging, guessing wrongly, and completely off-balance. When each of the elder statesmen left the ballgame, and the score remained tied, it seemed a foregone conclusion that the Mets’ bullpen would win the war. In fact, had you known in advance it would be an extra-inning affair, it would seem implausible to assume anything other than a New York victory.

Until the LOOGY failed.

With Chase Utley and Ryan Howard due up in the top of the 11th, Willie Randolph opted to go to his top lefthanded specialist Pedro Feliciano, rather than make Guillermo Mota pitch another inning. Mota looked sharp, expending only 12 pitches — 9 for strikes — in tossing a perfect tenth. But with the big lefty guns coming to the plate, Willie played the percentages, hoping to neutralize the potential impact of Utley and Howard. However, the move did not go as planned.

Chase Utley sent the second pitch he saw from Feliciano over the left-centerfield fence, providing the go-ahead run. Ryan Howard nearly matched the effort, driving a 2-0 pitch off the rightfield wall for the longest single of the game. That was all for Feliciano, and Joe Smith eventually allowed an insurance run on a bases-loaded single to Abraham Nunez, who ran the count full and fouled off five pitches before poking a ball past the drawn-in infield. Smith was not sharp, walking one, hitting another, and falling behind each batter he faced. He was lucky to get out of the inning allowing only one run.

As has been the case lately, the Mets’ leadoff batting has been dismal — only three batters leading off an inning reached base in 11 innings. A team can get by with that kind of futility when homeruns are flying over the fence, but the Mets haven’t hit a homerun in three straight games, and have hit only four in their last seven (three by Carlos Delgado, one by Ruben Gotay). If you’re not hitting balls over the fence, it is imperative to get the leadoff batter on frequently to create runs by other means — but the Mets can’t seem to get anything going.

The two Mets runs were scored in the second inning. Carlos Delgado led off the inning with a walk, David Wright doubled off the wall, and Paul LoDuca drove them both home with a single to centerfield. That was the whole offensive story for the New York Mets on this fine evening.

The Phillies answered in the top of the third with their first two runs in a contrasting fashion. After two quick outs, Jimmy Rollins reached on a seemingly harmless infield single. However, Shane Victorino followed with a cheap, bloop double to put men on second and third, and Utley followed with a single to Chase both runners home. Tough luck for Tommy Glavine in that inning.

Later, in the sixth, the Phillies had a chance for a big inning, but ran themselves out of it. Utley led off the inning by smashing a double off the centerfield wall, and Pat Burrell followed with a walk. Aaron Rowand then hit a sharp single down the rightfield line, which Carlos Gomez played beautifully and then threw a sizzling missile to home plate. The ball reached LoDuca quickly — it looked as though it might knock him down, that’s how strong it was — and Utley held up at third. However, Burrell put his head down when rounding second and assumed Utley would try to score. LoDuca sprinted up the third base line to keep Utley in place and chase down Burrell, who was then caught between Jose Reyes and the third base bag. LoDuca eventually flipped the ball to Reyes, who ran Burrell into the already occupied third base. So instead of bases loaded, one out, the Phillies instead had two out and two men on; Abraham Nunez grounded out meekly to end the inning.

Guillermo Mota and Billy Wagner both looked good, and were throwing gas. Wagner hit the upper 90s on several pitches. Interestingly, he made only four warmup pitches before pitching the ninth (pitchers are allowed to throw up to eight).

Speaking of warmup pitches, Ruben Gotay has been grabbing the catcher’s glove and warming up pitchers between innings while LoDuca gets on the gear. He’s been doing this for at least the last two weeks, from what I’ve noticed, and doing OK — though he had a bit of trouble handling Wagner’s near-100-MPH warmups (and without a mask!). Maybe Gotay is preparing in case the Mets need an emergency catcher, or maybe he’s just looking to help the team in every way he can — either way, it’s good to see.

Carlos Beltran was useless at the plate in his first game back, but made several good catches in center. With he, Gomez, and Chavez out there together, there’s no way a fly ball reaches the grass.

Tom Glavine was 2-for-2 but was lifted for a pinch-hitter in the seventh (Ruben Gotay struck out in his place). Gotta play those percentages.

Speaking of that move, by batting Gotay in Glavine’s spot, Randolph had the option to leave Gotay in the game at second base, and put the pitcher in Damion Easley’s spot. Easley walked later in the inning before Beltran flied out to end it. Such a move would have kept the pitcher from hitting a few batters later, and saved a pinch-hitter — not to mention, improved the infield defense. Most likely, Randolph opted to stay with Easley because he already had two hits in the game, and he likes to “play the hot hand”. (Strangely, it doesn’t work that way after Gotay goes 3-for-4 in a game.)

Julio Franco poked a pinch-hit single in the bottom of the eleventh with two outs, and it looked as though Jose Reyes beat out an infield hit, but was called out on a very close play. Yes, it was a case of too little, too late, but who knows — if Reyes is called safe, maybe Damion Easley follows with one of his dramatic walk-offs into the bleachers (and serves me a big can of shut-the-heck-up when it comes to Easley bashing).

Orlando Hernandez faces Adam Eaton in a 7:10 PM game that the Mets absolutely, postively, must win. If they can’t beat Eaton, they can’t beat anyone, and they certainly won’t have much chance against Philadelphia ace Cole Hamels in the series finale. Giving away two games to the Phils in this series isn’t too harmful, but getting swept could be just the twinge of undeserved confidence the Phillies need to play over their head for a while and make a nuisance of themselves in the coming months. My preference is to keep them buried.