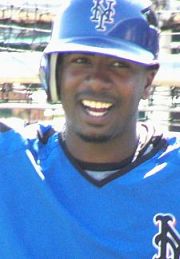 Ruben Gotay was once a prized prospect in the Kansas City Royals organization, their 2004 Minor League Player of the Year and a starter in the Futures Games. Somewhere on his way to be KC’s second baseman of the future, Gotay hit a rut and found himself a non-prospect, dealt away to the Mets in an unheralded trade for minor league utilityman Jeff Keppinger. Gotay spent all of 2006 in the minors, and was not on the 40-man roster over the winter.

However, the Mets chose to promote Gotay, and not Anderson Hernandez, when Jose Valentin went down with an ACL injury. Since then, Gotay has flashed a brilliant glove, good speed, fine instincts, and some pop — batting .308 with 2 homers, 2 doubles, and 9 RBI in 39 ABs. This past Sunday, the planets were properly aligned to allow him a rare start, and he went 3-for-4 with a homerun, 2 runs scored, and 3 RBI. Such a stellar performance earned him a spot on the bench a few feet closer to the water cooler — after all, veteran scrub Damion Easley is on fire, batting almost .260 (and we know Willie Randolph likes to play the hot hand).

You may be wondering why Ruben Gotay hasn’t been given more of an opportunity to play. Well, it’s a personal thing; here are ten solid reasons Willie Randolph hates Ruben Gotay:

Reviewing the above, it’s obvious why Ruben Gotay remains on the bench. And his future prospects with the Mets don’t look good. If he doesn’t shape up quickly, he’ll likely find himself back in New Orleans when Jose Valentin returns next week.