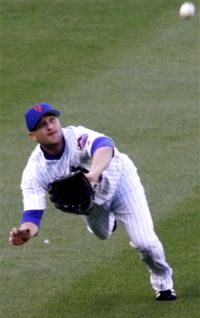 I don’t know what’s more disgraceful — the fact that the Mets couldn’t score more than two runs against one of the worst starters in MLB, or that Aaron Heilman couldn’t close the deal in the seventh inning — and allowed the yappy terrier Jimmy Rollins to be the hero.

Orlando Hernandez pitched another masterful outing, shutting out the Phillies for six full innings. He allowed only three hits and walked four, and struck out 3 on 99 pitches before yielding to Heilman, who promptly gave up a three-run homer to eliminate El Duque from the game’s decision.

Though, you can’t completely blame Heilman for the loss — the Mets hitters should be embarrassed for their meek effort in this ballgame. It’s games like this that recall the mid-70s, when Tom Seaver and Jerry Koosman would throw three-hitters but lose because the best hitters in the lineup were Felix Millan and John Milner. Aside from a solo homer by Carlos Beltran and a run scratched out on a Carlos Delgado groundout, the Mets could muster nothing offensively. Further, they failed miserably in their one legitimate rally in the game, in the bottom of the seventh. Ruben Gotay led off the inning with a walk, David Newhan followed with a double, putting men on second and third with none out. In that situation, the Mets HAD to push home at least one run, but didn’t. Julio Franco ripped a grounder that Ryan Howard stopped, holding Gotay at third, Jose Reyes was intentionally walked, and Endy Chavez bounced into a double play to end the inning. To add injury to insult, Chavez hurt his hamstring on the play and left the game.

The Phillies added an insurance run in the 8th when Willie Randolph decided to play the percentages again, and bring in Scott Schoeneweis to face Chase Utley and Ryan Howard. Utley hit a grounder up the middle (do the Mets NOT have scouting reports?), reached second on a groundout by Howard, and scored on a single by Aaron “I’m Playing Way Over My Head” Rowand.

David Newhan has failed miserably in at least three sacrifice bunt attempts this year. The type of player that he is — scrappy, punch-n-judy, speedy backup guy — one would expect he’d be a spectacular bunter. Instead, he’s downright awful. Of course, his inability to bunt Ruben Gotay over in the seventh was glazed over by the fact that he flared a double after popping two bunts behind the backstop.

Absolutely wonderful to see Carlos Beltran bounce out weakly on the first pitch he saw leading off the 8th while down 4-2. Great fundamental baseball, ‘Los. Someone needs to remind him that even a 700-ft. solo homer only counts for one run, not two or three.

Cole Hamels will attempt to pitch a 9-inning, complete-game, 2-hit shutout against the Mets in the series finale to complete the Phillies sweep of the Mets at home in the worst series we’ve seen in two years. Hamels carries his broom in at 7:10 PM. John Maine will take the mound for the Mets, but will it matter?

(Disclaimer: yes this is an incredibly sardonic recap, but I do have faith that the Mets will hit and win again when the walking wounded return. It’s just so darn frustrating to lose this way to big-mouth Jimmy Rollins and Chase “Mr. Perfect” Utley — who reminds me of a cross between Steve Garvey and Derek Jeter.)