Chan Ho: Gone But Not Forgotten 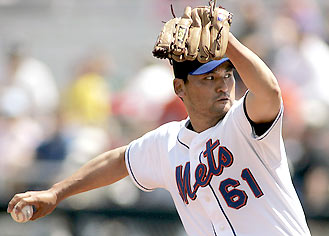 The Mets quietly and unceremoniously released Chan Ho Park a few days ago, not that anyone noticed, or cared. His 5.57 ERA in AAA and 15.75 ERA in his one start in the bigs were a major disappointment, and the Mets organization is currently focused on getting Brian Lawrence ready.

Though Ho is gone, he’ll not be forgotten. First of all, the Mets are responsible for the remainder of his $600,000 salary (unless he signs with another club, in which case they would be responsible for the difference between what he is paid by the new club and the remainder of the $600,000), so the checks are still being signed and sent out. Secondly, we are reminded again of his tenure today, during the MLB Amateur Draft, because as a result of signing Park off the scrap heap, the San Diego Padres received a sandwich pick between the first and second rounds.

Of course, that pick wasn’t taken from the Mets — they’d already lost their 29th choice to the San Francisco Giants for signing Moises Alou — but it’s still remarkable that a player like Park is valued as, essentially, a high second-round pick. (By the way, to see a rundown on the draft choices, check out The Baseball Analysts, who are doing an awesome job covering the event).

Believe me, I understand that there needs to be some kind of compensation for free agents lost by teams, but doesn’t something seem out of kilter when a team gets a top 60 pick for losing a LOOGY, a fourth outfielder, a backup infielder, or a washed up reliever?

Back Another One Bites the Dust
Next Mets Game 58: Loss to Phillies