As we all know, Francisco Rodriguez’s velocity has gone down in the past few years, and he’s throwing fewer breaking balls. The result is he’s more hittable. I’m not entirely sure why K-Rod started relying more heavily on the change-up over the nasty slider and curve. Personally, I prefer that he made that change (pardon the pun) because the slowball is very effective and it takes much less toll on the arm.

Though, is it a coincidence that K-Rod is now throwing half as many breaking pitches as he did in 2006, and his average velocity has lost a full 4 MPH since then? Or maybe the two are somehow related?

Huh … everyone wondered how Omar Minaya was able to sign K-Rod “so cheaply”. Kind of funny that Minaya acquired two relievers (remember J.J. Putz?) as damaged goods in that winter following 2008. Anyway, I digress …

I checked out video of Francisco Rodriguez going back to 2006 and every year since. He made some minor changes to his mechanics in 2007 due to a problem with his left ankle that began when he landed awkwardly and injured it.

So I was talking about watching video. Here are some snapshots: 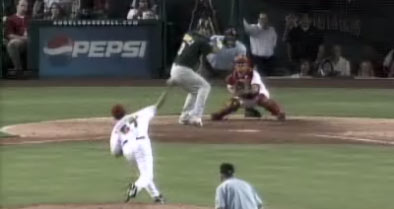 This is a shot of his release point from 2006. Note how his head is starting to veer toward the 1B line, but his momentum is still driving toward home plate. 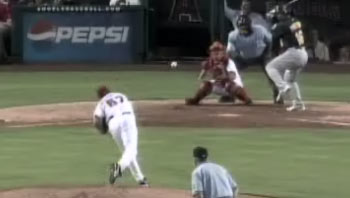 Also from 2006, but after the release point. Check out his landing foot -- straight, knee locked, and stable. 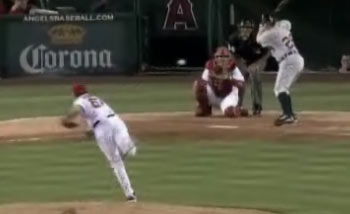 The next photos are from K-Rod’s appearance on July 3rd. 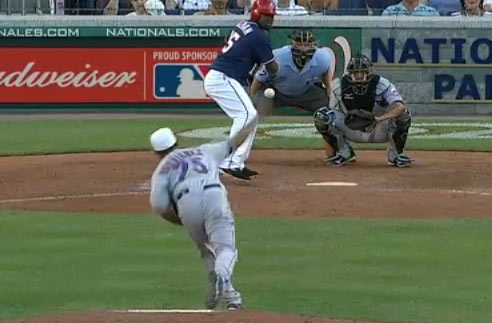 The release point is similar to 2006, but his body is following his head toward the 1B line. 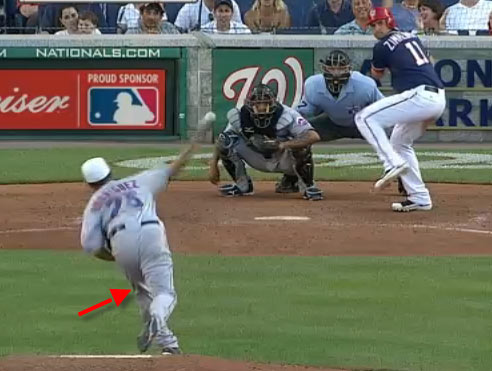 Another shot of the release point, but at a different time in the game. Again, note how his upper body is kind of twisting away from home plate. Also note the landing leg, which is collapsing at the knee (see the red arrow).

From what we’ve read, that knee bending forward probably has something to do with taking pressure off the ankle and shortening his stride. Generally speaking, when a pitcher shortens his stride, he can lose some velocity (also, the ball has to travel a slightly longer distance). 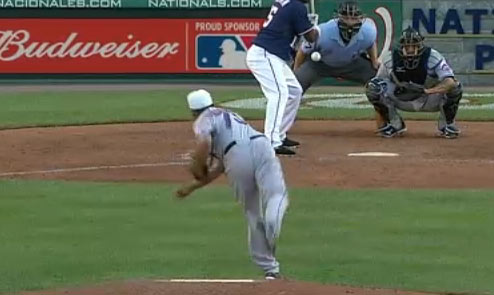 Compare to a similar point in the follow-through from 2006 above. Again, the front leg is collapsing but also it looks like his ankle is rolling over and is completely unstable. A pitcher can't have much command when he is unbalanced. 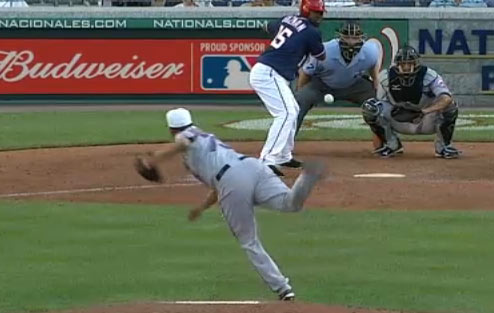 Further along in the follow-through. K-Rod has always had a wild follow-through toward 1B, but here you can see it has more to do with his landing leg being unable to support him, rather than the violence of his momentum.

Another thing, maybe it’s the baggy Mets uniform, but for some reason K-Rod looks like he’s carrying more weight than he did in 2006. It doesn’t take a genius to realize that extra weight can put a strain on joints (like ankles).

So what does it all mean? I’m going to go out on a limb and guess that the left ankle problem is flaring up again. K-Rod didn’t say a word about the injury in 2007, so it wouldn’t be surprising if he was hiding something now. A weak ankle would definitely explain K-Rod’s command issues lately, and could have something to do with his velocity continuing to dwindle. That said, it wouldn’t be surprising to see him start to use more sliders and curves — unless he is also hiding an elbow issue. Oh, and an elbow injury could have been sustained as a result of changing his lower-body mechanics back in 2007.

Interesting how things can tie together, isn’t it? It’s as if body parts are all connected, or something … dem dry bones!