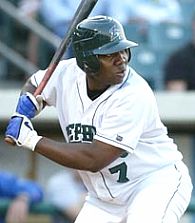 When the Mets needed to promote another outfielder on June 8th, they chose Ricky Ledee.

Most likely, this is because Ledee is the illegitimate son of Willie Randolph — there hasn’t been any other tangible evidence he keeps showing up on the roster year after year.

However, the guy they should have brought up was Chip Ambres.

In six games last week, Ambres had 17 hits and three homeruns, capped by a 5-for-5 day on June 7th — the day before the Ledee promotion. Ambres hit .586 in that span, and was named the PCL Batter of the Week.

So why did the Mets bring up Ledee?

Oh, that’s right, they needed a lefthanded bat, not a righthanded one. And of course it’s much more important to have a veteran lefty bat available to swing and miss than to have a righty hitting .586.

Seriously, I’m sure that’s what played into the decision: Randolph’s “trust” (based on what, again?) in the “veteran” (i.e. journeyman) Ledee, and the fact they were keeping the righthanded-hitting Carlos Gomez on the roster. I believe Ben Johnson was also on the roster on that date, so it’s true the Mets would have been righty-heavy. However, when a guy is obviously “in the zone” the way Ambres was last week, you have to find a way to get him up to the big club and in the lineup. Streaks like that happen once in a lifetime — see: Kevin Maas, Shane Spencer, Mike Jacobs, et al.

Most likely, Ambres does not have the skills to contribute to the Mets over the long haul, but as long as he was as hot as he was, it’s strange he wouldn’t get the call. What’s a guy gotta do to earn a promotion?

Back XM Radio for Dad
Next 15 Reasons Not to Panic