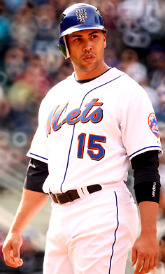 Over at mlbtraderumors, Tim Dierkes broached the possibility of trading Carlos Beltran.

Unless the Mets are in dire straits financially and need to further cut payroll next year, I think the whole premise behind trading Beltran is that the Mets would be better off reinvesting most of the money committed to him to a more sure-fire investment, or perhaps fixing a variety of needs at the big league level next year. Despite the immense pressure to win, maybe the Mets will have a hard time adding salary, but I think they will at least try to keep payroll constant.

It is hard for me to opine on this matter, since I do not know who will be available via trade next off-season or much about the free agent market.

But I will say this. Let’s say Beltran gets hot over the next three weeks; I am almost sure he will, if for no other reason than regression to the mean (he is not .612 OPS bad). Say he raises his overall line to a respectable .265/.335/.430. The Mets then trade him to some club offering some B-grade prospects in return for the Mets agreeing to assume around $6 million of the $18.5 milllion Beltran is due next year. That sounds awfully tempting.

I think that is a reasonable deal. Say he matches production similar to his 2007 or 2008 campaigns- an .875 OPS. and an wOBA around .375 or .380. I will be pessimistic and say he costs 10 runs defensively in center, and is merely average defensively in right. Under either scenario, he would be worth roughly 3.5 wins — the market for that is $16 million, and more for a contending ballclub. In fact, thinking about that makes me reluctant to trade him.

In addition, the fanbase’s reception to trading him should not be too worrisome; the Mets can pay Joe Beningo to launch a Soviet-style propaganda campaign aganinst Beltran.

In all seriousness, though, part of this decision will almost certainly hinge on the organization’s faith in Fernando Martinez and how he will perform while with the big club. As I mentioned in my last post, while I am not as worried about the promotion derailing his development, I could envision a scenario where Martinez holds his own at the plate over the remaining short stretch of the season, hitting .270/.335/.430, with an average wOBA (.330-.335), causing the Mets to trade Beltran and making Martinez the starting right fielder next year. We have seen this act before: in 151 plate appearances in 2008, Daniel Murphy hit .313/.397/.473 with a .373 wOBA, and Jerry Manuel declared him the starting left fielder next spring.

Hoping that Martinez will be an even average hitter is probably an unrealistic expectation, considering he only posted a .786 OPS. and a .338 wOBA in AAA this year. Even if Martinez replicated that production in the majors — and I am assuming he would also save 5-10 runs in right field over a full season given his range — you are still looking at a very fringy, about 2-win starter, and there is a whole lot of downside to consider. Given he would be making the league minimum, maybe the Mets are willing to settle for that, but they would be better off saving his cost-controlled years for when he is really ready to be productive.

Back Pat Misch May Start on Saturday
Next August 11: Wednesday Mets Links