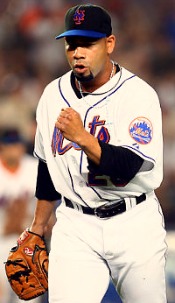 For the third consecutive season, Pedro Feliciano set a new Mets record for appearances by a pitcher, while leading the league in the same category. “Everyday Pedro” was exactly that, taking the ball 92 times – including a whopping 23 appearances in September / October. The modern-day Iron Joe McGinnity pitched without rest (i.e., back-to-back days) an incredible 43 times. Manager Jerry Manuel and pitching coach Dan Warthen both insisted that such use did not affect Feliciano’s performance, and didn’t physically harm him. Maybe not.

One stat proving their point was the number of homeruns he allowed – only one. Quite an accomplishment, especially considering he allowed 7 gopher balls in each of the previous seasons. Pedro also induced 10 double plays – which was, um, double what he did in 2009. But, his WHIP swelled to 1.53 (after a 1.16 posting in ’09) and his effectiveness was uneven – dropping off significantly in July and August. Those who look at stats in more depth will point out that opposing hitters’ BABIP of .351 as an indication that Pedro suffered from bad luck. Maybe … or, maybe batters were getting better pitches to hit than they did in the past.

Overall, his numbers weren’t terrible, and in fact he was quite good in stretches – not unlike a streaky hitter. It could be argued that Felciano’s drop in performance (if indeed there was one) was due as much to overuse as it was to his ever-changing role.

Regardless of how you judge Feliciano’s season, the bottom line is that he continues to be one of the premier LOOGYs in MLB. The question is, what is that worth to a Mets club that is unlikely to sniff the postseason in 2011? Feliciano turned 34 in August, and isn’t likely to vastly improve any part of his game. He “is what he is”, which is a valuable asset to a championship club in need of one final bullpen piece. This winter he hits the open market as a free-agent, and it’s going to be hard for the Mets to justify spending more than the $2.9M he earned in 2010, and/or offering him beyond a one-year deal. As much as I have enjoyed my daily dose of Pedro over the past five years, it seems apparent that he’ll be wearing an opponent’s uniform in 2011.

Click here to read the 2009 Analysis of Pedro Feliciano

Back 2010 Analysis: R.A. Dickey
Next Why I Haven’t Been Writing About the GM Drama