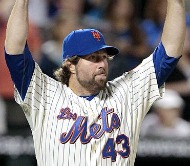 What is there to say? R.A. Dickey was the Mets’ MVP – “no question”, as Jerry Manuel might say. Without Dickey’s 11 wins and 175 IP, the Mets are battling the Washington Nationals to stay out of the NL East cellar, rather than staying neck-and-neck with the third-place Marlins.

Dickey’s season was so magical it seemed to have been scripted; surely, the Disney execs are working on a movie based on it right now. The million-dollar question is, naturally, can he do it again? Or, will he run out of hair tonic?

On the one hand, the performance came out of nowhere, and was a complete transgression from what Dickey has done in his other seven seasons in MLB. On the other hand, he’s only been throwing the knuckler since 2005 – a pitch that takes a long, long time to perfect. It can be argued that Dickey has finally “figured out” the pitch, and may ACTUALLY GET BETTER as a result. A cursory look at his minor-league and MLB stats suggest there is something supporting that theory – particularly his walk rates, which have reduced by one-half. Indeed, R.A.’s ability to stay around the plate was remarkable for a knuckleball pitcher – or ANY pitcher, for that matter. Dickey walked only 2.2 batters per 9 innings in 2010, a full walk below the NL average. Compare that to HOF knuckleballer Phil Niekro’s career average of 3.0, or Tim Wakefield’s 3.4.

Dickey’s success is of course directly tied to the knuckleball – a pitch whose course changes rapidly depending on the air currents. Which way the wind will blow in 2011 and beyond for R.A. and his knuckler is anyone’s guess. With Johan Santana likely out for the year, the Mets have no choice but to bet that the winds don’t change for Dickey. Let’s hope this feel-good story never ends.

Back Why Bobby Valentine Won’t Be the Next Mets Manager
Next 2010 Analysis: Pedro Feliciano