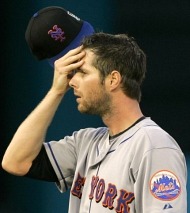 When I first put together my list of players for whom to write evaluations, John Maine didn’t appear on the Mets’ 40-man roster, and as a result, I completely forgot about him.

That pretty much sums up Maine’s 2010 season: forgettable.

Going into spring training, Maine and Oliver Perez were supposed to be the lynchpins in the middle of the Mets’ starting rotation. Both pitched ineffectively, became injured, lost significant velocity, and as a result, couldn’t be removed from the team fast enough.

Maine has always had issues with command, mainly due to a mechanical flaw in his pitching motion. Interestingly, that flaw is part of the reason for his short run of success – his delivery is as such that he can only hit one part of the strike zone consistently: up and in to right-handed batters / up and away to left-handed batters. A pitcher can find moderate success throwing to that spot with 95+ MPH heat, which is what Maine did from mid-2006 through mid-2007. Unfortunately, a pitcher eventually needs to have a more rounded strategy and command of other pitches in order to succeed over the long term. Also unfortunately, those mechanics that produced the velocity and location that made Maine successful, also were a tremendous strain on his shoulder muscles. Eventually, the shoulder was going to break down, and it did. Maine underwent surgery, and returned with the same mechanics, same location, but a fastball that struggled to reach 90 MPH.

John Maine is eligible for arbitration, and if he goes through with it, he will earn at least $2.6M in 2011 (80% of his 2010 salary). Remarkably, the chance of his salary reducing as a result of arbitration is almost nil – the system is rigged so reductions rarely occur. Because of that, there is almost no chance whatsoever that the Mets offer him arbitration; his best chance at remaining an employee of the Mets is if they non-tender him (effectively releasing him) and then re-sign him on a minor-league deal. If that’s what happens, it wouldn’t be the worst thing in the world – the Mets have, after all, invested in his physical rehabilitation the last two years, so it would be nice to get some payback in the event Maine does find a way to be a moderately effective MLB pitcher again. However, there’s a slim chance of that happening if he doesn’t regain the 95-MPH fastball.

Click here to read the 2009 Analysis of John Maine

Back Collins’ Experience: Good or Bad?
Next 2010 Analysis: Mike Pelfrey