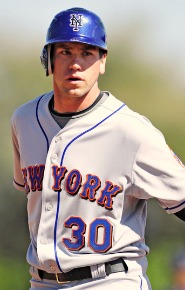 For me, Josh Thole was one of the biggest and most pleasant surprises of 2010.

Based on what I saw of him in late 2009, I didn’t think Thole would ever evolve into a mediocre Major League catcher, and further, did not believe he’d ever provide enough offense to make up for his lack of defense.

As it turned out, I ate crow on both accounts.

Thole developed enough skills behind the plate to be mediocre – i.e., not significantly hurt the team’s chances of winning. He received the ball without embarrassing himself, was mobile enough to block a few pitches, and showed enough improvement with his footwork to throw out some runners (he caught 11 of 24, or 44%). I wouldn’t go so far as to say he controlled the game from behind the plate, but he must have done a decent job of handling pitchers and calling games, since pitchers had an ERA of 3.58 with him behind the dish.

Additionally, Thole provided far more offense than I ever expected, hitting .277 and posting a .357 OBP. His .723 OPS was uninspiring, but if he can continue to get on base and make contact, he has an outside shot of being a poor man’s Jason Kendall.

Since Sandy Alderson values the ability to get on base, and the Mets are in rebuilding mode, I’d imagine that Thole gets the opportunity to catch a full season in 2011 and show what he can do. If he can match the defensive improvement he made from ’09 to ’10, and continue to get on base around 36% of the time, the Mets might have something. My only concern is that his catching mechanics are limiting, in that they’re acceptable, but require significant athletic ability to improve upon. But who knows, he might have that ability, and/or he may improve enough offensively that it won’t matter.

Click here to read the 2009 Analysis of Josh Thole