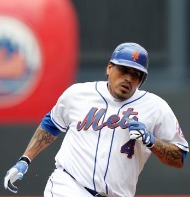 When Henry Blanco was signed in early December of 2009, it was the biggest signing of the offseason to that point. I made some fun of the signing, since it seemed silly to sign a backup catcher before a starting catcher – particularly since the Mets seemed intent on either keeping Topps Rookie Omir Santos as a backup and/or slowly transitioning Josh Thole into the starting spot. Though, picking up Blanco is the type of “veteran depth” pickup that a pennant-contending club makes, and at that point, Omar Minaya believed the Mets would be pennant contenders.

As it turned out, Blanco exceeded expectations with the bat – in the first half, anyway. He hit a surprising .370 in May, popping some dramatic late-inning extra-base hits during the season’s first few months. By the end of the year, however, “regression to the mean” got the best of Blanco, as he finished with a .215 average and putrid .571 OPS.

Defensively, he did a good job of throwing out runners, catching 11 of 22 (50%), and pitchers had a 3.27 ERA when pitching to him. Of course, that number was helped by the fact that Blanco caught 13 of Johan Santana’s starts – which amounted to almost one-third of the times he was written into the starting lineup.

All in all, Blanco did about as well as expected. He provided very little in the way of offense, threw out runners, called a decent game, and was awful at framing and blocking pitches.

Henry Blanco will not return to the Mets as a player in 2011, mainly because he is old and has nothing to offer offensively, but also because fellow Venezuelan Johan Santana is unlikely to throw a pitch. However, he is by all accounts a “good guy” with baseball acumen, so maybe he’ll latch on as a coach in the organization. Personally, I hope he doesn’t attain a role as an instructor, because his catching mechanics are atrocious, but I could see him evolving into a pitching coach or manager at some point.