“Why is the SNY staff’s skin so orange?”.

Good question, Sammy. No one’s quite sure. Lee Mazzilli, for one, looks like Tony Soprano meets the Great Pumpkin. It could be all the carrot juice they’re drinking during commercials. Or perhaps the makeup crew is trying to match the Mets’ official colors — and if they chose the other color, it would appear they were copying the Blue Man Group (or stealing from the Smurfs). 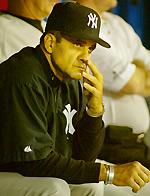 In any case, they look healthier than the men in the Yankee dugout — specifically Joe Torre — who appear seriously jaundiced. The Yankees trainer would do well to contact David Wright about some of his Vitamin Water — the Power-C or 50-Cent should do the trick.

The Mets issues seem to be with pitching and hitting. Isn’t it a no-brainer to make a deal with the White Sox to get Mark Buehrle and Jermaine Dye?

While the Mets could certainly use both of those players, I’m not so sure it’s a “no-brainer”. The biggest issue is that both Buehrle and Dye will be free agents at the end of the year, and thus the Mets would be essentially trading for “rent-a-players”. Though letting Dye walk would not bother the Mets much, Buehrle would be a guy worth locking up for a few years. However, word on the street is that Buehrle’s dream is to play for the St. Louis Cardinals, and he’d be a fool not to test the free-agent waters after seeing what Barry Zito commanded on the open market. If the Mets can find a way to get those players without giving up the farm — i.e., Lastings Milledge, Mike Pelfrey, Philip Humber, Carlos Gomez, and Fernando Martinez — then I’d agree it’s a “no-brainer”. Unfortunately, the White Sox most surely will demand at least one or more of those highly-touted prospects in a deal.

Do you have a question for MetsToday? Send your question through the Contact Page. We promise not to berate, embarrass, or otherwise offend you (at least, not publicly).

Back Hear MetsToday on The Sports Docket
Next Twins Killings Me