Who cares what happens on Sunday — the Mets FINALLY won a series. Perhaps more importantly, they shut out a team, and won by a very slim margin, and won in the last inning. All these facts are good for gumption. And gumption is what you need to be a first-place team.

A’s starter Joe Blanton was spectacular, pitching 8 innings of shutout ball, allowing just 5 hits and 1 walk, striking out 6, and expending only 107 pitches in the process. However, Orlando Hernandez was nearly as good, going 7 innings, allowing 6 hits, 1 walk, and striking out 7 (using 119 pitches). Pedro Feliciano and Aaron Heilman combined to pitch a perfect eighth, and Billy Wagner preserved the shutout with a scoreless ninth — though he did make it interesting by allowing an infield single to leadoff batter Bobby Crosby. Crosby was sacrificed to second (yes, a Billy Beane team BUNTED — for shame, for shame), but was stranded there when Wagner disposed of pinch-hitter and walkoff specialist Marco Scutaro with a fly to right and struck out Travis Buck.

Ramon Castro then led off the bottom of the ninth with an 0-2 double down the leftfield line off reliever Santiago Casilla (just where the heck was Shannon Stewart playing?). Carlos Beltran was walked intentionally, and David Wright became the hero by lining a ball to right field that skipped past a diving Travis Buck.

Ironically, Castro had no business being in the game — but more on that later.

The Mets are now undefeated in their last two games.

Blanton was tough on the entire lineup, except for the suddenly hot Carlos Beltran, who went 2-for-3 against him.

Both the Philadelphia Phillies and the Atlanta Braves lost, so the Mets picked up a game over each team.

Oh, there was one other interesting action in the game — a Mets player exhibited passion. In the sixth inning, Paul LoDuca lost his sh*t.

LoDuca came up with to bat with men on first and second, after a double by Ricky Ledee and a walk to Jose Reyes. He took an 0-1 pitch inside, but home plate Marvin Hudson called it a strike and LoDuca got in Hudson’s face to pronounce his displeasure with the call, using his hand (as any good Italian would) to explain his point.

Paulie then walked up the third-base line, took a breath, and was about to return to the batter’s box when Hudson threw him out of the game.

At that point, LoDuca went ballistic. 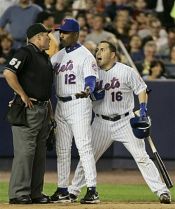 He began screaming at Hudson, somehow keeping his eyes from popping out of his head. Willie Randolph ran out and tried to restrain him, but Paulie grabbed Willie by the sleeve and tossed him aside like a rag doll, going back after Hudson.

First base umpire (and crew chief) Ed Montague ambled down shooed Lo Duca away while Willie had a talk with Hudson. Paulie, however, was not quite done. After returning to the dugout, LoDuca heaved his helmet, bat and elbow guard toward first base. Apparently, that was just a warmup, because he then threw his shin guards out onto the field. His chest protector was intended to follow, but got hung up on the dugout railing. By the time he was done extracting his equipment, at least 51,000 of Shea Stadium’s 52,920 were chanting “Paul Lo Duca! Paul Lo Duca!”

Fittingly, Sunday is Paul LoDuca bobblehead day — sponsored by the ever-so-spicy Gold’s Horseradish. (You can’t make this stuff up.)

John Maine takes the mound against Joe Kennedy (no, not THAT Joe Kennedy — he’s been dead for years) at 1:10 PM. I hear the swooshing sound of straw against cement in the background.

Back Beltran – Marquee Player?
Next Mets Game 73: Win Over Athletics