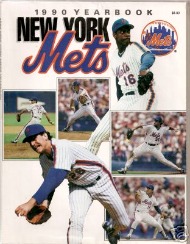 The 1990 Mets looked great on paper, headed by what looked like the best starting rotation seen in Flushing since the days of Seaver, Koosman, and Matlack.

Doc was 100% healed from a shoulder injury that marred his 1989 and at 25 years old, and primed to regain dominance as the most feared righty in baseball. Viola was only 30, two years removed from a Cy Young Award, and considered the top lefthanded starting pitcher in MLB. Cone was coming off a so-so year (for him), but put up numbers similar to those that helped him go 20-3 in ’88. Both Darling and Fernandez were coming off of 14-win seasons, and seemed to be turning a corner — many thought ’90 would be the “breakout year” for each of the previously inconsistent pitchers. The rotation was so deep, Ojeda was banished to the bullpen, despite still having enough stuff to be a #3 or possibly #2 on another club.

On offense, the Mets had returning veteran stars Darryl Strawberry, Kevin McReynolds, and Howard Johnson providing the punch in the middle of the lineup, supported by up-and-coming youngsters Gregg Jefferies and Dave Magadan. The NL East was a tough division, but it looked like the Mets would be tough to beat — even if the offense was less dynamic than it had been in previous seasons.

As it turned out, Viola and Gooden had strong years, winning 39 games between them, but Fernandez and Cone suffered from a lack of offensive support and Darling and Ojeda both shuffled between the bullpen and rotation as the underachieving Mets finished second the NL East. It was the genesis of an interminable decade of misery for the Mets.

Going into 2011, the Phillies look somewhat similar to those ’90 Mets, in that — on paper — they appear to have the best starting rotation in all of baseball. Cliff Lee and Roy Halladay compare favorably to the Viola / Gooden one-two punch, and Oswalt is similar to Cone in terms of pure stuff and previous history of success. Hamels could be considered a comparable to Fernandez in that they both had/have streaks of dominance and at times looked like the filthiest lefties in the game. As for the #5 starter, it appears that (assuming they move Joe Blanton) the Phillies will have Kyle Kendrick — who may not look much like Darling but may play a similar role in the upcoming drama (if only Jamie Moyer could come back for one more year, the Phils would have an Ojeda comp!).

The bullpens are hard to compare because the game has changed so dramatically in the past 20 years, but you could argue that the back-end of John Franco and Alejandro Pena is similar to Brad Lidge and Ryan Madson.

So the pitching matches up similarly but what about the offense? Not unlike the 1990 Mets, the Phillies have three big boppers who will be relied upon heavily in the middle of the lineup: Ryan Howard, Chase Utley, and Raul Ibanez. They’ll also be counting on young Domonic Brown to provide some punch in the way the Mets looked to Jefferies. The Phillies don’t have another youngster on the horizon, but singles-hitting corner man Placido Polanco is not dissimilar to Magadan.

The contrasting difference between the teams is at the other positions; where the Mets had Daryl Boston in CF and Kevin Elster at SS, the Phillies have Jimmy Rollins and Shane Victorino. That could be a wash, if Rollins and Victorino continue their downward trends. Behind the plate, the Mets had an offensive-minded, defensively challenged Mackey Sasser while the Phillies have a solid all-around backstop in Carlos Ruiz. Unless something awful occurs with Ruiz, the Phils probably have the advantage there.

So while it appears that the Phillies have already won the 2011 NL East, we can look back to our own Mets history and see that all that glitters is not necessarily gold. Just because the Phillies can trot out a potential Cy Young Award winner four out of every five days, doesn’t mean they’re guaranteed a postseason placement. The games still have to be played, fortunately, and for all we know, this could be the beginning of a very long, dark period in Phillies history.

And by the way, I have bridge for sale, if you’re interested.

Back Done Deal: Phillies Sign Cliff Lee
Next Would You Extend Jose Reyes?