Would You Extend Jose Reyes? 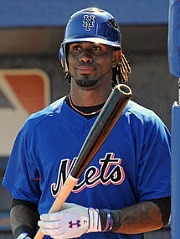 The Mets have publicly admitted that 2011 will be a year of “assessment” and salary dumping — and if they can find a way to compete through this season-long evaluation, it will be a bonus. The “new normal” for Mets management is to avoid the long-term, back-loaded, handcuffing contracts that have put the team in their current state of misery.

And that’s fine — it makes good sense. It doesn’t matter that the Mets had the wherewithal to chase a player seemingly built for their home park (Carl Crawford) — just because you can, doesn’t mean you should.

The Red Sox — a team whose home park may be the exact opposite of Citi Field — wound up spending far too much money and committing too many years for Crawford. As much as I would have loved to see Crawford running around the outfield pasture and basepaths in Flushing, his cost wasn’t congruent with the Mets’ long-term plan.

However, the Mets already have a player very similar to Crawford, but who plays a much more premium position. His name is Jose Reyes, and he’s on the brink of entering the prime years of his career.

He’s also in his walk year, and Sandy Alderson has publicly declared that there will be no contract extension negotiated before Opening Day.

After seeing a left fielder grab a 7-year, $142M deal, one would think that a shortstop with a similar skill set would receive offers STARTING at those figures.

Before it gets that far, wouldn’t it make sense to at least talk about an extension? Not a seven-year addendum, of course, but how about gauging Jose’s interest in a 2- or 3-year extension? Reyes has stated on multiple occasions — including recently — his desire to remain a Met and stay in New York. Right now, his leverage is at a low point due to his injuries in ’09, the thyroid problem of last spring, and the fact he’s not on the open market. But one relatively healthy season will change his bargaining power drastically — and if he has the kind of year of which we know he’s capable, his cost will skyrocket into the stratosphere. With a big year, he’ll price himself out of Flushing and the now-sensible, responsible front office. There won’t be any 6- or 7-year deals given to a shortstop approaching his 30s, because the back-end part of the contract won’t make financial sense.

But if the Mets were able to work out a 2- or 3-year extension now, they would control Reyes during what is normally a player’s “peak” years: ages 28-30; that age 31 year is likely to be the beginning of a downward trend, but also likely to be bearable.

Don’t listen to the naysayers who spout about Reyes’ “durability issues” and “questionable personality” and use those faux factors as evidence Reyes won’t be worth it, and/or won’t be highly coveted by other teams. First of all, shortstops with Reyes’ skills don’t grow on trees, and the ones that have them are locked up long-term. Secondly, even if Reyes has a so-so year — similar to his 2010, for example — there will be no shortage of suitors for his services. Heck, there could be a few teams from the NL East putting in bids, considering that the Nationals are suddenly big-time spenders and the similarly spendthrift Phillies will have Jimmy Rollins off the books. Outside the division, the Dodgers should have their ownership cleared up by then and can say goodbye to Rafael Furcal next winter; the Cubs have had internal discussions about eventually moving Starlin Castro to 2B, which would free up SS; the Reds would jump at a chance to upgrade from light-hitting Paul Janish (sorry, cuz); and the Giants could have an opening at short (and Barry Zito finally coming off the books). I didn’t even get into the AL teams yet, but you can guess that the Red Sox, Tigers, Angels, and White Sox would all be in play; there’s reason to believe the Mariners, Orioles, and Blue Jays could put in bids. Let’s not even discuss what happens if Derek Jeter continues to trend downward in ’11. Take a cursory look around — there aren’t many two-way shortstops in the game today.

If the Mets know something about Jose’s thyroid issue that hasn’t been shared, then I can understand the hesitancy to lock him up for a few more years. I’d also “get it” if the Mets had a promising solution waiting on the farm, but they don’t (sorry, but I see Ruben Tejada as a career utilityman, and I don’t buy into the Wilmer Flores dream). But if Jose’s thyroid is OK, and the current talent evaluators share a similar view of the young shortstops in the organization, then something smells really fishy about refusing to at least talk about an extension for Reyes. If you don’t want a player of his caliber playing shortstop for you in 2012, 2013, and 2014, then is this “long-term plan” much longer than we think? More concerning, is there a real financial problem related to the Madoff Affair that has yet to rear its ugly head?

What do you think — would you at least start a conversation with Jose Reyes to discuss adding a few years to his current contract? Again, I’m not saying lock him up for a half-dozen years; just gauge his interest in extending by two or three. Why, or why not? Let us know in the comments.

Back Comparison: 1990 Mets and 2011 Phillies
Next Steve Phillips Was Right After All