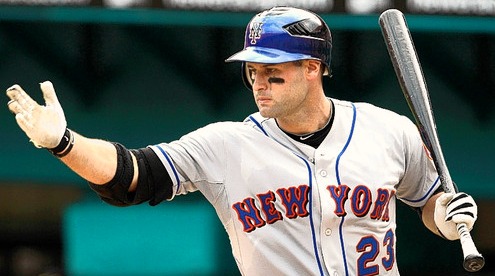 In case you haven’t yet heard, “The Animal” has gone south for the winter (and spring) — Chris Carter has signed a minor-league deal with the Tampa Bay Rays, who extended an invitation to spring training.

The 28-year-old Carter was non-tendered by the Mets in November. He hit .263 with four home runs and 24 RBI in 100 games for the Mets in 2010, splitting time between right field and left field and coming off the bench as a pinch-hitter.

He was let go by the Mets because the new regime didn’t see him as a sure thing to make the 25-man roster, and because he spent as much he did on it last year, he would have been guaranteed to make at least $200,000 (60% of last year’s salary) even if he were to spend all of 2011 in AAA.

It was a somewhat surprising move by General Anderson and Co., since we assumed they valued players like Carter — who can hit, hit with power, and show an affinity to get on base. But I guess the move came down to saving a few extra dollars for the cash-strapped Wilpons. Hopefully they can pay the peanut vendors at Citi Field come April.

I’ll miss Carter, but once he was non-tendered, the writing was on the wall: the Mets’ future did not include his bat and hard work ethic. It always stunned me that Jerry Manuel had no problem making left field a platoon of Fernando Tatis / Dan Murphy, but avoided at all costs putting Carter in the lineup more than once a month. It also baffled me that Manuel never let Carter hit against lefthanded pitchers, since he tore them up in AAA. On the one hand I’m disappointed to see him go, but on the other, I’m happy for him and hope he gets a legitimate shot to make the Rays.

Considering his defensive deficiencies, one would think that Carter will be looked at in a DH role. However, the Rays already have lefthanded-hitting Matt Joyce penciled into that role. They also have a lefthanded-hitting first baseman in Dan Johnson. Though, Joyce also plays the outfield, and depending on where Ben Zobrist ends up, Carter does have an outside shot at making Tampa Bay’s big-league club. If nothing else, he’s likely to be the first corner man called up if he starts the year in AAA.

Back Would Mets Bid for Albert Pujols?
Next Mike Piazza and the Steroid Issue