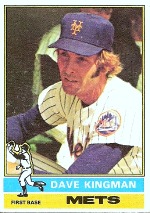 There were a few other players to choose from, but it had to be Kong. It had to be.

A few that I considered for various reasons included Wilmer “Vinegar Bend” Mizell (for the nickname, of course), Rico Brogna (for his given name, of course), Bruce Boisclair (for posing with an aluminum bat for his 1979 Topps card), Orlando Hernandez (for his many arm angles), and, especially, Terry Leach — who if it were not for Kingman, would have been my choice to represent #26. Because, how can one not like Terry Leach? He was the ultimate blue-collar underdog, a tremendous teammate, and by all accounts, is an interesting and fantastic human being.

But as much as I wish Terry Leach could have pitched forever, Dave Kingman is the guy.

The mid-1970s were a very difficult time for Mets fans. The team stunk, despite having perhaps the best lefty-righty combo in the league — Tom Seaver and Jerry Koosman — at the top of their rotation. They stunk because they could not score a run, ever. Their offensive ineptitude was staggering, but not surprising, considering they had people like Ed Kranepool and Roy Staiger manning the corner infield positions. And then they’d do really silly things, like trade one of their only legitimate MLB hitters (Rusty Staub) for yet MORE pitching (Mickey Lolich).

Except for Dave Kingman.

Kingman only played 2 1/2 years for the Mets in his first tour of duty in Flushing, but it seemed longer … and yet, at the same time, it didn’t seem long enough. But that’s the way it was with the moody, reserved, surly, sometimes blatantly nasty Kingman. His persona and his on-field performance were similarly rollercoaster-like. We loved him, we hated him, we loved to hate him, we hated to love him. But he was ours, and he gave the Mets a bit of personality — yet ironically, he had no personality. 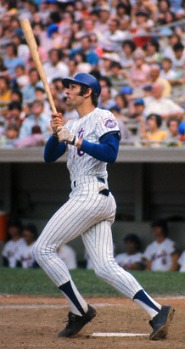 Kong’s physical gifts were impressive. Standing 6’6″ and possessing a rifle for an arm, Kingman was gangly yet athletic, but managed to underachieve despite his raw tools. Originally drafted as a pitcher by the Giants, he likely could have become a fireballing closer in the Dick Radatz / Goose Gossage genre had he remained on the mound. But his ability to hit the ball far distances could not be ignored, and he was eventually moved to the outfield. It’s hard to believe, but as a young, strapping ballplayer in his early 20s, he had enough athleticism to also be tried at third base, but his interest in defense never came close to matching his skill set. I doubt he ever would have been the next Brooks Robinson, but he might have been adequate at the hot corner had he only taken a slight interest in the position — adequate enough so that we would have never had to see Staiger in the orange and blue.

Enough about his defense; if you weren’t there to remember, surely you get it: he was underwhelming, in a maddening, frustrating way. Interestingly, his offensive game was similar. Usually, he looked like he might fall asleep in the batter’s box — I swear I saw him yawn on occasion — but then, whoosh! would his bat fly through the air in a dramatic, vicious uppercut, sometimes making contact, most times not. When bat met ball, it was magic … it was thrilling … it was powerful … it was awesome, before the word “awesome” was overused and lost its meaning. On the rare occasions he made contact, there was no question that he did — the impact made a thunderous “thwack” that was unlike any other sound on the planet. His homeruns were prodigious, sometimes reaching distances beyond 500 feet. The line drives he hit (rarer still) were downright scary, with a ferocious overspin and speed that might have been deadly had an opposing third baseman lost his focus for a millisecond. Even his popups were impressive — maybe moreso than his homers (I distinctly remember him once reaching the roof of the Kingdome while playing for the A’s a decade later.

I would never say that Dave Kingman was a “good” hitter; he was terrible. Despite this, his at-bats demanded your attention, because he might just do something absolutely incredible. Usually he didn’t but when he did, you didn’t want to miss it. Believe me, the 1975-77 Mets needed all the “can’t-miss” episodes they could gather.

The Mets parted ways with Kingman on June 15, 1977 — the same day they also traded Tom Seaver. In return for Kingman, the Mets received Paul Siebert and Bobby Valentine from the Padres — a package that stirred no interest nor performance. It was a wild ride from there for Kingman, as he was waived by San Diego in September and picked up by the Angels, only to be swapped to the Yankees with two weeks left in the season before moving on to the Cubs as a free-agent in November. Five clubs in six months — that has to be some kind of record.

Kingman returned to Flushing during spring training of 1981; ironically, in a trade for Steve Henderson — one of the “young studs” obtained in the Seaver deal of the “Midnight Massacre” of June 15, 1977. His second go-around with the Mets wasn’t quite as dramatic nor as interesting as the first. He seemed even more disinterested, dispassionate, and ornery than before, and the Mets — with enthusiastic, energetic, and youthful ballplayers on the verge of establishing the core of the great teams of the mid- to late-1980s — were going in the opposite direction of Kingman, who was trudging through his final days as a ballplayer (i.e., one who plays defense as well as offense). Eventually, he moved on to Oakland as an offensive specialist, and did fairly well in the less-demanding role of DH. I try not to think about that second tour, because it was so dull and ill-fitting — he just didn’t belong, and didn’t add anything of interest to the team at that time. But back in ’75-’77, when the cleanup-hitter alternative was Eddie Kranepool, “Kong” was often the reason one would watch a Mets game.

26 days until pitchers and catchers report, in case you haven’t figured that out by now.

Back 27 DUPACR: Pete Harnisch
Next Reyes Pulls a Pujols