With Pedro Feliciano moving on to pitch for the Yankees, the Mets have brought in a so-so selection of lefties to audition for his LOOGY spot: Michael O’Connor, Taylor Tankersley, and Tim Byrdak. You might even throw Chris Capuano, Oliver Perez, and Pat Misch into the conversation, as well as minor leaguers Roy Merritt, Eric Nieson, Mark Cohoon, and Robert Carson. 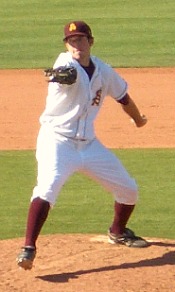 How about Ike Davis?

Crazy, right? But in the deep dark winter, irrational, unrealistic thoughts tend to enter my mind. I’ve even thought my joke post to reverse the game could be considered seriously.

The idea is that Davis would be able to enter an inning on the mound to face one lefthanded hitter, then go to first base when a righty came up, then return later that inning or later in the game to face another lefty. Using Davis as a LOOGY would open up a roster spot, and allow the Mets to set up more lefty-lefty matchups in a game.

Think about it: bringing in a LOOGY to face Ryan Howard and Chase Utley not once a game, but twice — or three times! Or, bringing in a LOOGY, only to have the opposing manager counter with a RH pinch-hitter, and then slipping in a ROOGY to counter-counter — while still keeping your LOOGY available because he’d be moved to 1B.

Of course, there are some issues to work out, such as getting Davis enough warmup pitches prior to the inning in which he’d be used. Oh, and then there’s the small matter of whether he’d be good enough to retire MLB hitters.

But the idea isn’t as far-fetched as it sounds, considering that Davis — son of former late-inning reliever Ron Davis — was a pretty good pitcher in college. He started 12 games in his freshman year at Arizona State, and was an effective reliever in his junior year, winning 4 games, saving 4, striking out 30 batters in 24 innings, and posting a 0.88 WHIP. Those numbers are nothing to sneeze at, as they were put up in the always-tough PAC-10 Conference. Davis was originally recruited as a DH / pitcher by ASU, and was used in the outfield because of his rifle arm. In fact, the reason he is a first baseman is because he was put there by ASU to keep his arm fresh for closing games. Here is a snippet from a Baseball America scouting report from 2005, written during his senior year in high school and prior to the June draft:

Davis had realistic expectations of going in the first round, both as a pitcher and hitter coming into the year, but he had a disappointing spring, in both roles, as Chaparral won a third straight state title. While he has excellent bat speed and continued to hit for average (.447), he drove balls only in spurts, which magnified his lack of speed and athletic ability. His velocity also slipped. It settled into the high 80s this spring after being 87-91 and touching 92 in the past. But he still gets exceptional movement from a three-quarters angle. Scouts are split on where to play Davis, but most see greater upside on the mound. His father, on the other hand, wants him to be an everyday player. The debate could benefit Arizona State, which recruited him to play both ways and has penciled him in as its starting first baseman for 2006.

I didn’t see him pitch at ASU, so have no idea whether he had big-league stuff. From what I’ve heard, he threw at least in the low 90s during his junior year, but don’t know what he did for secondary stuff. If he threw in the mid- to high-90s, he wouldn’t necessarily need other pitches in a LOOGY role (but then, he likely wouldn’t have been drafted as a first baseman, either).

It’s been only a little over two years since Ike Davis last pitched competitively, so he wouldn’t have too much rust to shake off. Why not put him on the mound and see what he can do? If he can find the plate with his fastball and mix in a slider, he’ll have enough to be a LOOGY. In spring training, have him spend about 15 minutes to a half-hour a day throwing off a mound under the close watch of Dan Warthen. What’s the worst that can happen?