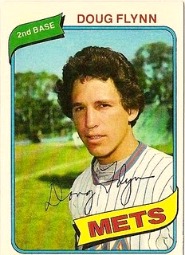 There are 23 Days Until Pitchers And Catchers Report to spring training. To commemorate the day, we honor Doug Flynn, who wore #23 for the Mets from 1977-1981.

Why Doug Flynn? Because, in so many ways, Flynn symbolized what the Mets were in the late 1970s and early 80s: offensively feeble, defensively steady yet unspectacular, uninspiring overall, and displaying a lack of something to look forward to.

That’s not necessarily a knock on Flynn, who had his moments and was — frighteningly — something of a bright spot during very dark days in the franchise’s history. But Flynn was a major link to the glorious past, being a key component in the Tom Seaver trade of 1977.

The Mets traded “The Franchise” for Flynn, Steve Henderson, Pat Zachry, and Dan Norman. At the time, Seaver was the best pitcher in baseball — the Roy Halladay of his time, and already considered a future HOFer. You might want to compare the package the Blue Jays received for Halladay, but it’s not quite the same as apples to apples, considering the complexity of contracts and financials of today’s game — there were only a few teams in MLB who could afford Halladay, and had both the wherewithal and desire to obtain him (and extend his contract). Back in 1977, Seaver was well-paid, and, like Halladay, would require a contract extension (which was the crux of why the Mets jettisoned him), but would have easily fit into the budgets of at least 20 teams, if not all 25 not playing in Flushing. So, when the Mets fetched a package headlined by Flynn, Zachry, and Henderson, it was, well … underwhelming. More frustrating is when you look back and realize Flynn — who never hit higher than .255 — might have been the best of the lot.

One thing Flynn could do was play defense. Originally a shortstop, he had above-average range, soft hands, a strong arm for a second baseman, and was masterful at turning the double play. He wasn’t the type who regularly made diving stops for the highlight reels, but he rarely made errors when playing 2B (he tended to make more miscues while playing SS, something he did frequently in ’77 and ’78). Flynn was our defensive whiz on a team devoid of whiz kids. With a bat in his hand, though, was another story.

Flynn did two things well as a hitter: he could lay down a sacrifice bunt and he could make quick outs. Since he batted eighth exclusively, his ability to bunt wasn’t terribly helpful. Grounding out meekly on the first or second pitch he saw, however, helped those depressing games go by more quickly — so we can thank him for that. His offensive prowess is properly communicated by his stats:

Back then, his stats looked bad. Today, now that we look at things like OBP and OPS, one wonders how he stuck around MLB for 11 years. Check out his walk totals in particular — and be sure to compare them to his intentional walks (IBB)! Even though he batted eighth, you have to wonder why opposing pitchers found it necessary to walk him in order to get to the pitcher’s spot; Mark Bomback had a higher OPS than Flynn in 1980.

As a person, Doug Flynn was hard not to like — humble, easygoing, always complimentary on the rare occasions he was quoted. He played hard, always hustled, and had good fundies. He also was a semipro country singer in the offseasons, and contributed his time and money to many community / charitable services. An underwhelming hitter, but a good guy.

Ironically, Flynn after his MLB career ended, he became a beast of a hitter in professional slo-pitch softball. That’s no joke — he played in slo-pitch softball exhibition games during the 1988 Summer Olympic Festival and was inducted into the Kentucky Softball Hall of Fame in 1999.