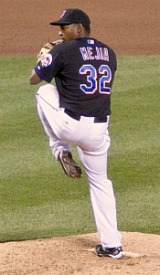 In case you missed it, on Friday afternoon Adam Rubin of ESPN-NY reported that Dan Warthen envisions Jenrry Mejia’s future in a big-league bullpen — not a starting rotation.

So glad we’re all on the same page, guys. We wouldn’t want to continue to mess with the kid’s head, right?

Personally, I don’t know where Mejia ultimately belongs. The one thing I “see” in his future are a number of DL stints, due to his violent, inefficient pitching mechanics. Mejia began experiencing shoulder problems before he had the chance to legally drink a beer, and assuming he doesn’t change his motion, those issues could become chronic. We’ll see if any adjustments are made this spring, but I’m doubting it, considering that Warthen described Mejia’s delivery as “solid and repeatable” this time last year.

If Mejia will be prone to arm issues going forward, in which role is he more suited — reliever or starter? Hard to say, because there are pluses and minuses to both. On the one hand, being a starter means a pitcher is on a set routine, and generally speaking, the body has a better chance of not breaking down when it has been properly conditioned to perform a particular activity at consistent intervals. With that in mind, as a starter making 100 pitches every fifth day (and following a strict throwing program on the other four), Mejia’s schedule is more likely to be consistent than if he were a reliever who might throw 10 pitches one day, 35 the next, then go four days without throwing at all, etc.

But, considering that Mejia’s mechanics are less than ideal, and he’s already suffered shoulder problems, there’s a good possibility that he’ll be prone to an overuse injury (“overuse” meaning moving the same body parts the same way over and over; not “overuse” as we defined Jerry Manuel’s bullpen strategy). In other words, if Mejia throws 100 pitches every 5 days, that’s at least 600 pitches a month (actually, much more when you consider warmups and throwing on off-days). Maybe his arm will break down more quickly with that kind of load, in which case it could be a better plan to use him out of the bullpen, where he’s likely to throw about one-half (or less) of that volume.

Twelve of this, dozen of that …

Trying to properly manage and develop a perfectly healthy young pitcher with acceptable mechanics is difficult enough and not without controversy. But when the subject in question is already damaged goods, and displays a self-destructive delivery, I don’t know that there is any “right” answer.

If it were me in charge, I’d try to adjust Mejia’s mechanics and put him on a very strict, progressive throwing program that consisted of only fastballs and changeups. The problem is that it’s difficult to completely overhaul a pitcher’s mechanics, and it takes an extraordinarily long time to re-learn good habits while losing bad ones — which is why you see so many fouled-up deliveries in pro ball these days. Good young pitching is expensive and rare, and the longer a pitcher goes using bad mechanics, the longer it will take to correct them. So most teams find it much more economical to work with what they have, make minor tweaks, set low pitch counts, and hope for the best. The shame with Mejia, of course, is that the Mets had the chance to get him on the right path, since they signed him as a 17-year-old. But that’s water under the bridge, and all the Mets can do now is keep their fingers crossed. Who knows, maybe Mejia won’t have chronic arm problems, and will turn into a solid MLB starter — or reliever.

Back 1 DUPACR: Mookie Wilson
Next Mike Pelfrey in Pinstripes