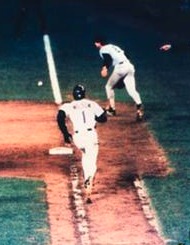 Back 2 DUPACR: Mackey Sasser
Next Jenrry Mejia As Reliever?